Flashback: Paperweights, Rare and Not So Rare

This article discusses the difference between rare and common paperweights, noting ways that one can tell if a paperweight is a genuine antique or an imitation. It originally appeared in the July 1943 issue of American Collector magazine, a publication which ran from 1933-1948 and served antique collectors and dealers.

“I have a number of books which belonged to my grandfather. They are very old, and I am quite sure they are valuable. Will you be so kind as to arrange with your friend, the rare book dealer; to look them over and let me know their value?” 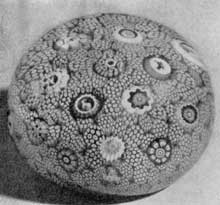 The books arrive. They are indeed old. The type is of an antique cut, the paper is brittle and streaked with brown. When I take them to my friend, the expert in old books, he examines them and shakes his head. “Not one in the lot,” he says, “is worth more than a few cents. The second-hand bookstores are full of this kind of antiques.”

A friend told me of an experience he had in France in the last war. While directing the work of a group of German prisoners who were doing some excavation work, they came upon a wall several feet beneath the surface of the ground.  Suddenly, while the wall was being pried apart, one of the prisoners found an ancient Roman coin.

The American was delighted when the German offered to trade his find for a carton of cigarettes. When the coin was examined by an American expert in rare coins, he pronounced it genuine enough, but added that it was worth no more than the price that was paid.

These cases are cited on account of the frequency with which similar disappointments occur in the field of paperweights. From time to time, I receive letters, not a few of them from dealers, regarding weights which appear to meet all the specifications of rare antiques, but which, after thorough examination, prove to be nothing more than modern approximations of genuine and valuable French and British antiques. 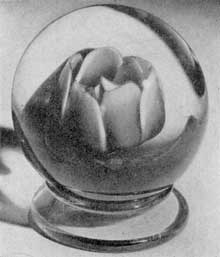 Three Desirable Antique Paperweights II: A Millville rose, an example of the work of Ralph Barber, who made some of the most artistically beautiful and distinctive weights of American origin.

The entire field of modern imitations and outright counterfeits is far too great to cover in anything short of a bulky volume, but I shall attempt in this brief space to set forth certain facts which may be of help to collectors whose experience is still limited, and who, therefore, stand in some danger of acquiring paperweights which, if not entirely worthless, are at least less valuable than they may appear.

At some time in the comparatively recent past, possibly around the time of the first World War, one or more makers of paperweights in Czechoslovakia migrated to Scotland, and, judging from the volume of output, must have set tip quite an establishment there. Whatever the motives of these Czecho-Scottish glassworkers may have been, the fact is that they tuned out a great many modern weights which followed quite closely the style and patterns of some of the finest of the antique weights.

The designs in these modern imitations are widely varied and include flower, butterfly, and geometrical patterns. The weights are extremely well made, and the canes are concise and well placed. Some of them are signed with the letters “P Y,” these initials appearing on the clear glass background. They are now generally accepted as the mark of the Czech weight-maker turned Scotsman.

Wherein do these imitations differ from the genuine antiques? The most obvious difference is in the metal, the clear portions of the glass having a grayish cast and lacking the brilliance of the genuine antiques. In consequence, the greens, reds, and especially the yellows are somewhat obscured and toned down. They lack the beautiful, decisive clarity you find in the bona fide antiques. The maker simply did not have the quality of metal which was available to the old-time paperweight makers. That which he was compelled to use bears a resemblance to the old Irish Waterford glass. 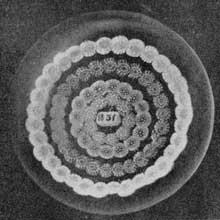 Three Desirable Antique Paperweights III: A weight of millefiori design that followed the Venetian tradition, made at Bristol, England.

The collector whose experience with paperweights is still limited will do well to compare every suspicious piece with a known antique. The difference will generally be quite apparent. As his knowledge grows broader — especially, if he “lives” with even a small collection of fine antique weights for a considerable length of time, and observes them under all conditions of light and shade — there will soon be little danger that he will mistake the plebian piece for the true aristocrat.

The Czecho-Scottish weights, if I may be permitted so to call them, were little known in the United States until shortly before the appearance of my book, Old Glass Paperweights. Examples of two of them will be found, however, on page 32 of that volume. The first cut shows an overlay with a butterfly surrounded by circular rows of set-ups. The second also shows butterflies, with the initials “P Y” inserted at the side. The patterns are applied on clear and opaque backgrounds, and they follow closely the compositions used in genuine old weights.

Weights of this type are at present being brought to this country with English pieces, but up to this time they have been much more numerous in the East than in the Middle West. It pays to be on guard against them, for to acquire one under the impression that it belongs among rare antique specimens is to court disillusionment, and, quite possibly, financial loss. 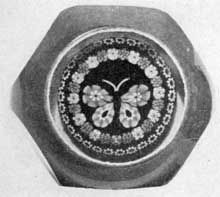 A Paperweight Signed P Y: Made by Czechoslovakian glass workers who migrated to Scotland about the time of World War I, it is an imitation of the earlier paperweights. Actual comparison with an antique weight will show lack of tone and color value in the reproduction. Not a collectible.

Allow me to say in conclusion that collecting antique paperweights would not have quite its fascination if all the procedure were cut and dried — if there were not certain pitfalls along the way, if it were not necessary to exercise your wits at least a little. Now and then you can commit an error that leads to disappointment, and it is by no means impossible to make a foolish mistake that you always feel a little ashamed of — but do we not commit similar follies in every other department of life? Quite possibly Providence knew what it was about when it did not make life quite perfect!

Perhaps the most valuable asset of the paperweight collector is a consuming interest in the subject. Intense interest — I speak now from personal knowledge! — goes far to make up for what we may lack in native wit. Interest helps us to understand and to remember; to put two and two together, and arrive at new hypotheses and conclusions; to seize every bit of new information and try to fit it in with what we had before; to develop our intuitions to a point where we can often “feel” that something is false or true long before we can demonstrate it by means of airtight logic.

If your interest is strong enough, it will teach you to observe, and to sharpen your perceptions, and perhaps the day will arrive when you see things which escape the notice of others and can echo the Wizard of Baker Street — “Elementary, my dear Watson!”

Art Glass PaperweightsSome of the earliest paperweights were made in Venice in the 1840s. They we…