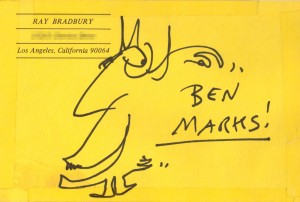 Our new page on Vintage Collectible Science Fiction Books got me thinking about the science fiction short stories and novels that captured my imagination when I was a kid. Like a lot of young people, I couldn’t put down Frank Herbert’s Dune, Robert Heinlein’s Stranger in a Strange Land, Larry Niven’s Ringworld, and just about anything by Philip K. Dick (I particularly liked Martian Time-Slip).

But the book that made the biggest impression on my young brain, and I’m sure I’m not alone in this, was Dandelion Wine by Ray Bradbury. It wasn’t science fiction per se, but there was something otherworldly about Bradbury’s description of one summer in Green Town, Illinois. I was especially taken by the role of Ticonderoga pencils in the beginning of the novel (the tools used by young Douglas Spaulding to record each day’s events) and at the end (a display of pencils and school supplies in a store window signaled the end of summer and the start of the school year). More than anything else I read, that book, for better or worse, made me want to be a writer.

Some years later, I had the opportunity to edit a profile on Ray Bradbury for a magazine in Southern California. It was my job to figure out how to contact him, to explain what we wanted to do, and to convince him that consenting to our interview would be just about the best idea he had had since the day he began writing The Martian Chronicles.

Bradbury listened to my nervous pitch with, I sensed, a mixture of mild impatience and benevolent amusement, interrupting me with questions throughout. He was a little worried about this, mildly worried about that, but ultimately he was game. The interview was on! After explaining the limitations of his schedule, we agreed on a date for me to pick up some materials that he thought would be useful to our writer.

Anyone on staff could have driven across town to Bradbury’s house to pick up the books and papers he had deemed indispensable, but I wanted to meet him, so I snuck out of work, Thomas Brothers map in hand, and headed west.

Imagine my disappointment when I arrived at his home to find a large envelope taped to the door with my name on it. But then, a split second later, I noticed that Bradbury had penned a grinning monster-like creature next to my name. Oh my god, I thought, I have an original drawing by Ray Bradbury, with my name on it! And then, unprompted on my part, the door opened and there stood the man himself, smiling as he apologized for leaving the envelope outside. He was about to leave for the airport, he said, so he did not want to miss getting his materials to me.

I barely heard him. All I could think about was the silly little doodle that he had dashed off. Would I have to give it back and transfer his papers, loose, into the briefcase I had brought with me for that purpose? Of course not. Let’s just say that Bradbury was a good deal less focused on the artifact he had so casually created than I was. He was a busy guy with a million things to do and a plane to catch, so we shook hands, said our goodbyes, and that was that.

To this day, I sometimes look at my trophy and wonder if I should have asked for the great man’s autograph. But mostly I look at the piece and smile to think that of all the words he has written in his long and productive life, I can at least claim a connection to two.

Confessions of a Failed Poster FlipperA Life of Cards, From Bridge to Magic