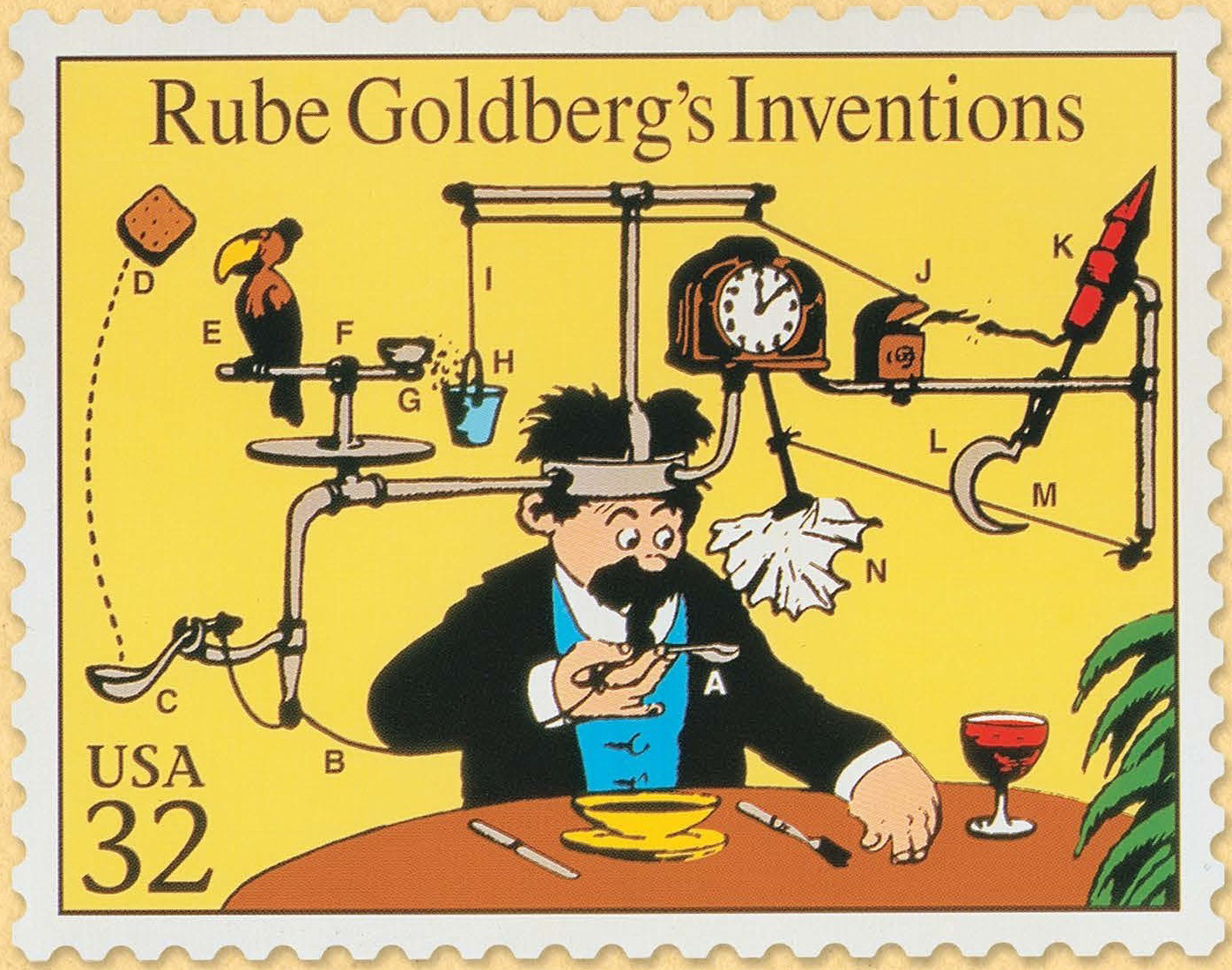 Every day, exciting new technologies and inventions designed to make our lives better make us crazy instead—if we’re lucky. A document you’ve been working on all day disappears from your computer, having been saved to an obscure folder you didn’t know existed; a social-media app secretly shares your personal information with Russian hackers, spawning a Constitutional crisis; a self-driving car kills a pedestrian, giving us yet another reason to fear the future. Indeed, it’s been quite a while since any invention could claim to be unreservedly useful (spoons come to mind), while most inventions of the digital kind have difficulty clearing even the low, Hippocratic hurdle of doing no harm.

“Goldberg recognized that staring at screens had become a national obsession.”

Rube Goldberg (1883-1970) understood well the limits of improvement through invention, as a new exhibition of his drawings and cartoons at the Contemporary Jewish Museum in San Francisco hilariously shows. Armed with little more than a pen and the laws of physics, Goldberg routinely pushed his ideas for inventions to their preposterous conclusions, solving problems that didn’t exist and making the simplest acts of everyday life as complicated as possible. Thus, a contraption worn on the head to wipe one’s lips with a napkin after sipping a spoonful of soup consists of no less than 14 moving parts, most of which must be reset after a single use. That device was memorialized as a U.S. postage stamp in 1995, but an even sillier “appliance” from 1929, concocted by Goldberg’s editorial alter ego, Professor Lucifer G. Butts, could lick a stamp in just 16 steps, with the help of two adults and a dog, of course.

Born on the Fourth of July in San Francisco, Goldberg lived during a time of tremendous technological change. As a young man, Goldberg was part of a generation that came of age as cameras, telephones, and automobiles were becoming commonplace. As an adult, Goldberg joined younger generations in embracing radio, movies, plane travel, and television.

These experiences informed Goldberg’s impractical drawing-board inventions, not so much for the mechanical details he may have occasionally pillaged but for the way in which Goldberg’s pen-and-ink characters blindly trusted their creator’s inventions to improve their lives. Goldberg’s readers, however, were not so easily duped. From the 1920s through 1960s, when Goldberg’s inventions were running in newspapers and magazines—eventually, they were also turned into puzzles and toys—Goldberg’s mustachioed and bald-headed rubes always struck his readers as fools, as ridiculous as someone wearing a pair of Google glasses looked to just about everyone in 2014, except, apparently, Sergey Brin. 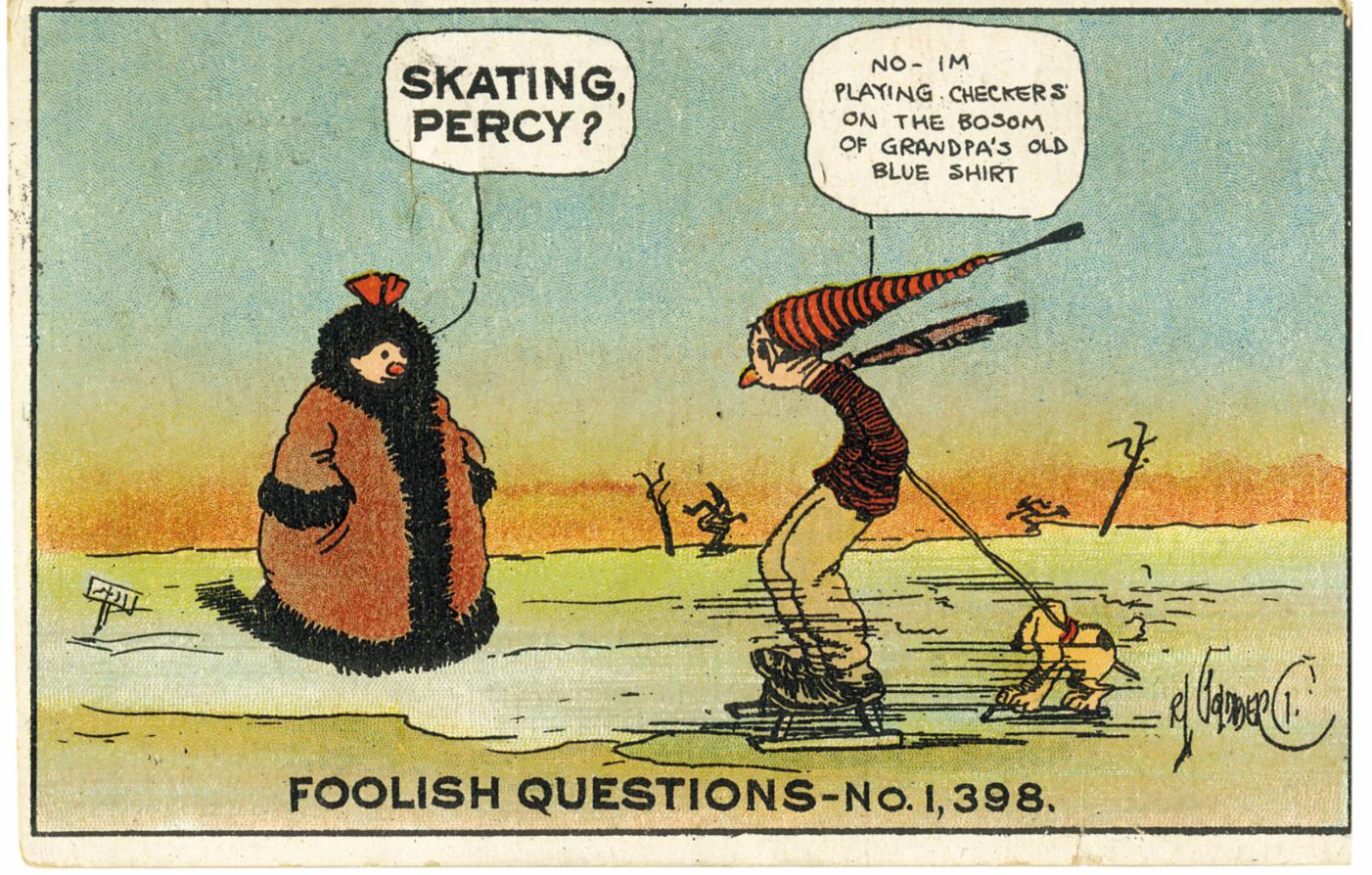 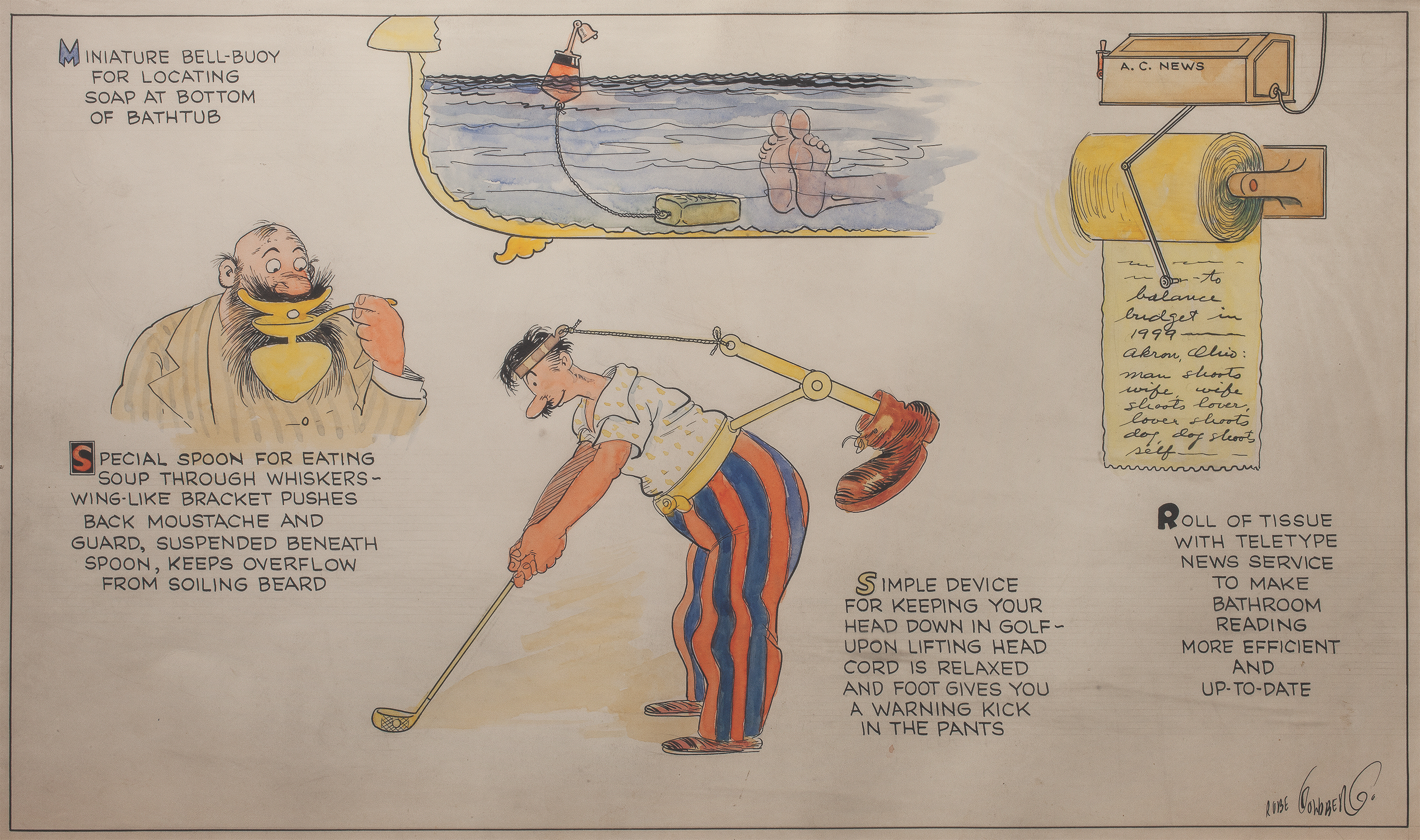 Over the years, a rogue’s gallery of curious characters also filled Goldberg’s cartoons, some given formal names—Mike & Ike, Lala Palooza, Boob McNutt—some generic—the recurring bald man with the bushy mustache, any number of stylish flappers in silly hats. Mostly it was all in good fun, but often Goldberg’s unease with technology, the subtext of his inventions, came to the fore in his political cartoons of the 1940s and ’50s. In one memorable drawing titled “The Numbers Blues,” Goldberg collected all the numbers that were beginning to define people’s lives and took them to their logical and unsettling conclusion, finding little difference between citizenship and prison. 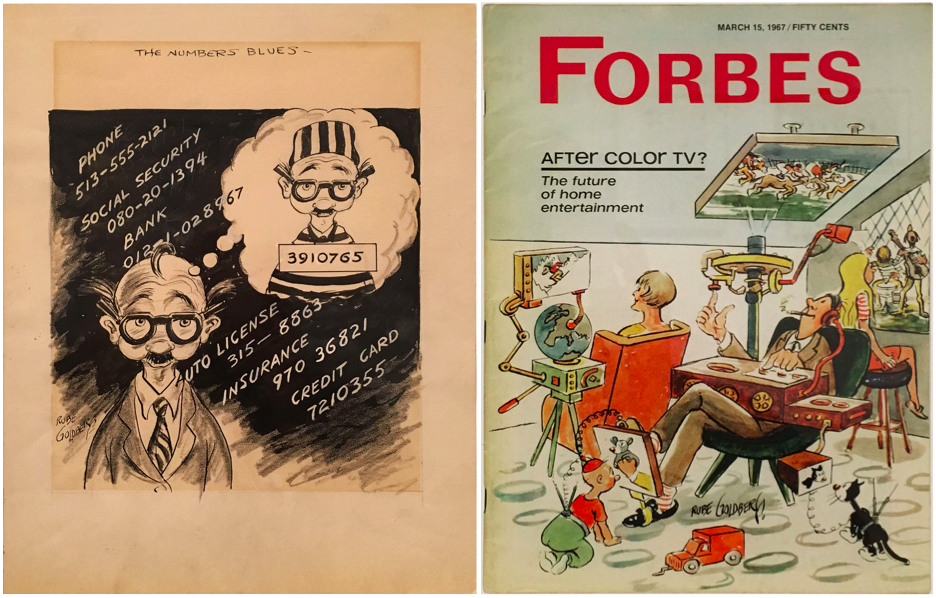 Even more striking is his cover for “Forbes” magazine from 1967. Drawn a full year before computer scientist Doug Engelbart delivered his famous “Mother of All Demos” in December 1968, in which he demonstrated what an Internet-connected world might look like several decades before anyone knew to call it that, Goldberg recognized that staring at screens had become a national obsession, an observation he dutifully carried to its disturbing conclusion, albeit in a humorous way. Engelbart may have gotten the technical details of our future right, but it was the cartoonist Rube Goldberg who understood the true impact technology would have on everyday people.

(“The Art of Rube Goldberg” continues through July 8, 2018, at the Contemporary Jewish Museum. For a terrific book about the life and work of the artist, pick up a copy of “The Art of Rube Goldberg,” which was organized by his granddaughter Jennifer George. And for more information about Rube Goldberg, visit rubegoldberg.com. If you buy something through a link in this article, Collectors Weekly may get a share of the sale. Learn more.)

Someday, Robots May Save or Destroy Us All—For Now, They're Still Kinda Dumb 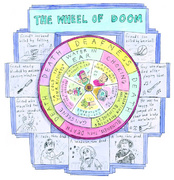 What Makes Cartoonist Roz Chast Laugh?Don't Panic: Why Technophobes Have Been Getting It Wrong Since Gutenberg