This article describes the patterns and characteristics of lacy glass goblets, also addressing the misconception that they are all French. It originally appeared in the May 1938 issue of American Collector magazine, a publication which ran from 1933-1948 and served antique collectors and dealers.

Whether or not Sandwich produced lacy glass goblets during its early period is a subject that interests collector and dealer alike. Excavations at the factory site have unearthed lacy goblet fragments of such character in metal and workmanship as to put the question beyond dispute. 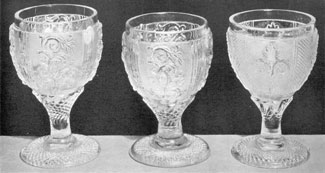 Typical Sandwich Goblets of Lacy Design: Goblets A and B are of the same design but B has a shorter and stockier stem, due to method used in casting bowls and footing separately, and then joining them when still hot. Goblet B has the pinkish tint to be observed in many Sandwich lacy objects.

In the haze that up to a few years ago surrounded identification of lacy specimens of many forms, it was common guess-work to attribute French origin to unfamiliar specimens, to any of exceeding brilliancy, and to such as possessed pattern or form that the particular critic thought “didn’t belong.” Such guess-work, of course, is as unresponsible as the grandmother stories which go with the sale of many American antiques these days.

The heresy that all lacy goblets must be French has largely rested upon the fact that France did make such ware, apparently commencing in the 1880’s, and that earlier French wholesale dealer price lists did illustrate lacy goblets as part of the stock then sold. The finding of such goblets as are of definitely old glass in France (although they are very infrequent) made further urge as to French provenance.

Writing about this French situation as we do, with no historic facts available from French factory record sources, we must confine our suppositions to the facts we actually possess. Those are that known French goblets have characteristics of design that in many respects are totally foreign to early lacy Sandwich work.

The fact that lacy goblets of possible Sandwich origin are occasionally found in France means no more than does the finding there of so many specimens of other forms of lacy glass which are positively Sandwich in genesis. Such findings are more or less common, not only in France, but in England, Scotland, Ireland, and the continental countries, just as other positively Sandwich lacy objects are found in South America, the British West Indies, China, and other export countries to which Yankee skippers carried American manufactures.

The presence of lacy goblet illustrations in a French price list, even of the 1840 period, does not stamp the product advertised as of French make any more than did the commercial listing of “British” clocks (made in Connecticut by Yankee hands in the first part of the 19th Century for British distribution to the uttermost parts of the earth) indicate that the clocks were made on British soil by British workmen.

All lacy goblets of early 19th Century workmanship are uncommon and are eagerly sought for by collectors. They are picked up more frequently here than abroad. The localities of finding have some bearing on our question. Those illustrated have all come from New England and usually from parts easily adjacent to Sandwich. Ordinarily we find but one or two at a time. Recently a set of six of like design issued from past obscurity in an ancient Sandwich home. 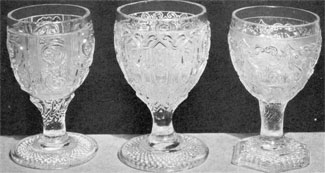 Several different designs are shown here. Goblets A and B (same design) appear to represent the most common pattern found. C we think is the next most common, and then come D and E, followed in rarity by F, G, and H. There are other patterns not here shown. While this placement is entirely arbitrary and quite apt to be upset by future development, it is permissible here, for it represents a close seven years’ study of nearly 100 of these lacy Sandwich goblets in the Green collection and other leading collections of the east.

Goblets A and B are of the same pattern and illustrate the difference in height which so often resulted from assembly of bowl with stem and footing. Such variation came about because in making such a goblet the two parts were pressed separately, fusion being made between the stem proper and the projection that formed the base of bowl. In that fusion the two parts to be placed in conjunction to make the perfect whole were, of course, subjected to necessary heat. Note the difference in thickness as well as length resulting from joining of stem and projecting lower part of bowl.

One will also observe in handling such specimens that each base bears a central round projection which was later ground down to make the goblet set evenly. This projection was cast as part of the goblet and was for pontil holding of the base and stem part during fusion with the bowl portion.

Goblet G sets unevenly because its pontil nub was not fully ground, owing to presence in the nub of a slug of metallic lead. Occasionally after the glass material had melted fumes from the burning wood fuel of the cruciblewould combine with the lead oxide element of the melt, and metallic lead, such as this slug, resulted. Usually such “seconds” were thrown away.

Lacy Sandwich is notable for the pink tint observable in many examples of various forms. That appears to be a rather common Sandwich attribute. Goblet B is definitely pinkish, while its companion A and two others of exact design do not have that tint.

The reader will see that the first eight goblets shown have a characteristic stem projection to the bowl. Its design differs according to the pattern of the bowl, but the general shape is the same. We think that the presence of this bowl projection and manner of assembly is distinctive of early Cape Cod work.

That does not mean, however, that all Sandwich lacy goblets would have to possess this particular form. Thus, we illustrate as Goblet I a specimen which has so many Sandwich characteristics as to make Sandwich attribution reasonable, although for the present we suspend judgment.

Elements of design, metal, and rim flare are common to known Sandwich work; the bowl, however, instead of having the bulkier base of the preceding eight, has a simpler, lozenge-shaped addition to provide that increased thickness of the glass necessary in fusion to prevent easy crack-age from the heat of the operation. It was an improvement in manufacture; so this goblet, if Sandwich, may be two or three years later than the others. 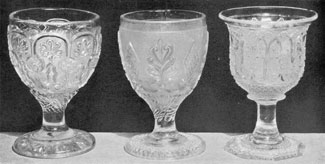 More Uncommon Goblet Designs: A slug of metallic lead can be faintly seen in the foot of goblet G which also stands unevenly. The pontil could not be ground evenly because of this imperfection. Goblet I has many characteristics of Sandwich work but the form of the stem is sufficiently different to make absolute attribution unwise for the present.

In connection with the subject of fusing two separately molded parts of an object to make a united whole, it is interesting to observe Sandwich’s methods in compote making. In some special instances a lozenge-shaped projection was cast as part of the dish, as in Goblet I.

But most lacy compotes were assembled by using stock pattern dishes upon especially designed bases and fusion was effected by introducing a gob of new hot metal between the parts. That explains why we find so many lacy compotes showing a heat crack in the dish part at point of junction, this resulting from the thinness of glass in the dish.

Desiring to have as little spoilage as possible, too great an extreme of heat in the process of joining was to be avoided. Because of imperfect fusion many such two-part objects came apart easily. Such a compote base being thrown away, the remaining dish part shows a pontil-like scar and may be falsely claimed by the possessor to be a “dish with pontil mark.” Pressed glass dishes do not have pontil marks, for their making had no such requirement and dishes bearing bottom scars are merely a part of a compote separated from its original base.