This article on pepper shakers discusses the materials used, the various design patterns, and the value of pepper in 16th century, describing some specific examples of pepper pots. It originally appeared in the August 1941 issue of American Collector magazine, a publication which ran from 1933-1948 and served antiques collectors and dealers.

Early American pepper pots, or casters, or muffineers (and they are all one) present an elusive quest. But their charm is great and their history interesting, for they played an important part in the daily lives of our early forebears.

A Group of Toby Pepper Pots: All are of glazed pottery, about three inches tall. They were made in England at the same time as the Toby jugs. The red and blue jackets and the green and yellow vests of these figures make them especially attractive and colorful.

There is an old painting called Taste, by Gonzales Coques (1618-1684), in the National Gallery in London which shows, on a table in the background, a plain little cylindrical caster without any handle. Thus we know that as early as the beginning of the 17th Century such casters were probably in common use. And among the necessities ordered from London for 17th-Century New England brides, we find listed, along with candlesticks and flat silver, “one pair sturdy casters.” 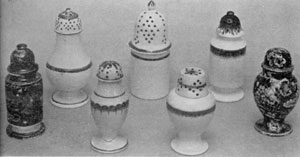 Of Leeds and Staffordshire Ware: The five pepper pots in the center are Leeds. They are of cream-white pottery with simple decoration in blue or green. The two at the extreme left and right are Staffordshire with deep-blue transfer decoration.

Indeed, when the Pilgrims came to America they brought with them, if there was a corner left in their carefully packed luggage, some few pewter peppers from England. Pewter was the highly prized ware for those of moderate means, and a single caster was sure to last one man’s family a whole lifetime.

These first little condiment pots were of the simplest pattern: cylindrical in shape with pierced lids. Utility was the one thought in all things, and so today we find a very few with square or curved side handles much like our modern pantry flour shakers. There is one in the First Congregational Church at Quincy, Massachusetts, and another in the possession of Dwight Mortimer Prouty, which bears the initials of the Reverend John Norton and his bride, Mary Mason, whom he married in 1678. This last little pot was made by William Conell of Boston sometime late in the 17th Century.

Salt and seasonings of all kinds were difficult for the early settlers to obtain. They gathered sassafras and sage in the woods surrounding their wilderness homes, and traded beads or a bit of homespun with the friendly Indians in return for chunks of coarse salt which the redskins found in secret caves. But although pepper, three thousand pounds of it, was demanded in 408 A. D. by Alaric as ransom for Rome, it was not until trade with the East Indies was flourishing that pepper and spices were readily available to the American colonists. 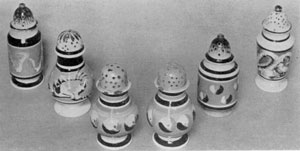 In 1520 Magellan set out from Portugal to chart a new route to India. He discovered, in the Pacific, Java, Sumatra, and the Philippine Islands where, natively, pepper grew in abundance. But for a long time after that, pepper was still so scarce and so dearly prized that a man might pay his taxes with a pound of it. It was deemed a worthy gift for the king.

The name caster doubtless originated from the very act of casting the salt or pepper on the foodstuffs; muffineers, from the old custom in England of shaking salt on hot buttered muffins; and pepper pots, obviously, for the pepper the pots contained. Recently, a maid in a collector’s home exclaimed over the large holes in the lids of some Early American casters.

“My goodness!” she said. “Folks must have liked their soup plenty hot if ever they shook pepper from the likes of these!”

But it must be remembered that pepper was then used in the whole grain, and not powdered as we know it today.

At one time there were three casters in a set: one for salt, one for pepper and, occasionally, one very large one for sugar. In the Metropolitan Museum in New York, there are two very beautiful old blue-and-white sucriers, or sugar shakers, twelve inches tall, and made by Rouen in France, 1700-1720. But it is rarely that you will find an exact pair today, identical in shape, size, and design. 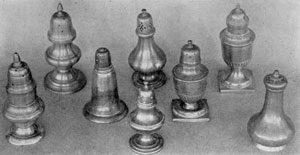 Early Pewter Pepper Pots: Mostly of American origin, these show the variations in which they were made and the irregularity of the perforations in the tops.

In the early 19th Century, when the desire for novelty especially prevailed, cruets came into being: crude frames of silver or some lesser metals, topped by a graceless handle to facilitate its passing from one member of the family to another, and with rings of various sizes about the center to contain the large muffineer for sugar, the smaller salt and pepper pots, and two glass bottles for vinegar and oil. Since, however, sugar bowls of our great-grandmother’s day were made one- and two-pint size to hold sugar in the large chunky pieces of that time, it is doubtful that many of these casters were intended to be used for sugar until a much later period.

The first variation from the straight-sided, earliest patterns came about 1700 with the pear-shaped and miniature Grecian urn peppers. They were three and four inches tall, with long necks above squat bowl-shaped bases, and elaborate fluted perforations in the thimble or acorn tops. Especially lovely are the silver models of this type which we find preserved today.

Octagonal shapes appeared at this time, too. But Roland Ruffer, the English writer, remarks, “Those whom the Gods love die young.” This applied to fashions as well, in the days of true craftsmanship, for it is apparent that these gracious octagonal pieces were not popular favor more than twenty years, from about 1730 to 1750.

Later Pewter Pepper Pots: With these, there was an infinite variation of shapes and forms. Notice the matching pair in the center. Pairs are rarely found.

We have no way of knowing why this was so, but their beauty was marked and we can but wonder that their day was so short. An outstanding example of the octagonal pepper is now in the possession of Mrs. Lydia B. Taft. It was made by John Burt, and bears the date of 1732, with the initials E H, for Elizabeth Henchman, whose daughter married Thomas Hancock. Another is in the Worcester Museum, a lovely silver piece created by Paul Revere, Sr., 1702-1754. And there are two in the Metropolitan in New York, beautiful silver specimens, one made by Moody Russell at Barnstable, Massachusetts; the other, by William Breed of Boston, between 1710-1761.

Silver, however, was not extensively used in this country before the latter part of the 18th Century. Silver coins had to be melted for remolding and only as trade increased outside were these coins at all plentiful. To take its place, therefore, silver lustre was introduced about 1785, made by a platinum deposit on pottery or porcelain bases. Copper lustre was achieved in the same way, copper solution on a reddish earthenware foundation. And as daily living became less and less of a grim business in this new world, many aesthetic touches were added; bands of blue or rose girded the rounded sides of the quaint little pepper pots, with flowers to lend a festive note.

Plain pewter peppers may be bought today, if they can be found at all, for as low as five dollars. Old silver ones are priced at fifty. Simple lustre casters sell for five to fifteen dollars apiece. But imagine the justifiable horror of our Puritan ancestors if they were to see in one of our modern catalogues a pair of silver casters copied from a model of 1734 and listed at one hundred and fifty dollars! One simple pewter pepper, costing a fraction of that sum, lasted a family a whole lifetime a century or two ago!

Silver and Copper Lustreware: All of English pottery, the three pepper pots in the center are of copper lustre; those at the outer left and right are of silver lustre.

Old New England corner cupboards often produce forgotten treasures of this same lustre period — mostly in Leedsware. These pepper pots are notable for their cool simplicity, their creamy or white-glazed pottery banded with uneven lines of lettuce green or soft blue. They are fat or thin, tall or short, bell-shaped, flat or thimbletopped — lovely, all of them.

My next door neighbors, Mr. and Mrs. C. Edwin Young, have gathered together more than a hundred little old muffineers of various sizes and shapes. Among them are four or five jolly Tobies, undoubtedly of the period of Toby pitchers, which date from the Georgian years. Their red hats are perforated, and their blue vests and yellow pants make them gay little pots indeed.

Then there are thirty or forty pewter casters, each one bearing the mark of a different maker, and each one different in itself. Some are straight-sided, some bulging; some shaped like a bell, a lighthouse, or a roly-poly pear. Pots in the old blue china of Washington’s time flank either side of a rich blue open salt dish. And silver and copper lustre follow in turn.

Most interesting, if not perhaps as old as the rest, Mr. and Mrs. Young consider a group of their shiny glazed pottery muffineers, which they picked up one day in Portland, Maine. The shopkeeper himself was loathe to part with them for he had never seen any before just like them, with the cat’s-eye and snake pattern in dull blue against a creamy-tan background. He knew them to be well over a hundred years old and they would doubtless date back to the early 19th Century, when lustre and glaze were in an advanced stage of perfection.