This article discusses the social significance of the silver spoon throughout history and the different types of silver spoons made from the 12th through the 19th centuries. It originally appeared in the July 1941 issue of American Collector magazine, a publication which ran from 1933-1948 and served antique collectors and dealers.

From the Middle Ages down, the silver spoon has been a symbol of a certain standard of living. “Born with a silver spoon in his mouth” indicated a person who began life well shielded against the harsh winds of poverty. Silver spoons were the first investments made by the English yeoman or by the early American colonist as they struggled up from meager beginnings. Gifts of silver spoons also marked such important events as births, weddings, and deaths. 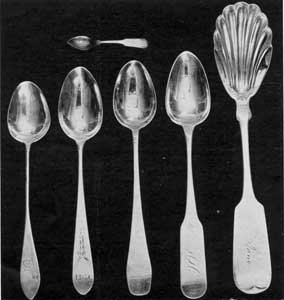 Typical American Silver Spoons: The group shows the style transition from the late 18th Century to the middle of the 19th Century. At the upper left hand is a doll's size fiddleback spoon made in New England after 1850.

“Come, come, my lord, you’d spare your spoons,” Shakespeare makes Henry VIII say to Archbishop Cranmer when the latter would fain be excused from acting as godfather to Elizabeth. And in the mid-17th Century we have Samuel Pepys remarking in characteristic manner on a christening which did not go to his entire satisfaction:

“Bose early and put six spoons and a porringer of silver in my pocket to give away today — went to Mrs. Browne’s where Sir W. Pen and I were godfathers to her boy. But for as much as I expected to give the name to the childe, but did not, (it being called John) I forbore then to give my plate.”

In the American Colonies, silver spoons of varying sizes also were considered suitable gifts for important occasions. From the fourth decade of the 17th Century when the first examples were hammered out, to the middle of the 19th Century when mechanized production caused the last silversmiths to lay down their tools, silver spoons were part of a young woman’s dowry. The quantity, of course, depended on the length of the parental purse, but it was a poverty-stricken household that could not find funds for at least six teaspoons and a tablespoon or two.

And while not of antiquarian interest, we can many of us remember the keen zest with which sweet young things of the 1890’s and early 20th Century collected souvenir tea and coffee spoons.

With this background it is not surprising that the beginner in collecting should be attracted to silver spoons. Although their making goes back several centuries, most of those practical for collecting and real use will be apt to date between 1780 and 1840. This does not mean that earlier examples are nonexistent. The National Museum of Antiquities in Edinburgh, Scotland, has at least one spoon that dates from the 12th Century.

Of American-made spoons, there are a very few bearing the mark of such early 17th-Century silversmiths as John Hull, Robert Sanderson, and John Coney. These are in museums and important private collections, however. Even spoons of the first half of the 18th Century are none too plentiful and, therefore, expensive.

The reason is obvious. Although spoons were made in fair quantity, even in the far from luxurious 17th Century, by the various silversmiths working in the American Colonies, constant use took its toll. Also, there was the practice of melting down old silver to appear again in newer designs which continued until well into the 19th Century.

The examples illustrated are representative of what the collector can find at not too much trouble and expense. Before discussing them, however, a few words on the types that preceded them are in order.

The spoon of the 12th Century, already referred to as well as those in use during Tudor days, had a fig-shaped bowl with a hexagonal handle ending in a decorative knop. The well-known Apostle spoons were of this type, the knop being the head of one of the twelve or sometimes of St. Paul.

Coming down to the Commonwealth and the Restoration, the type of spoon that Samuel Pepys put in his pocket and then “forebore to give” was undoubtedly of the “Puritan” type, a rounded bowl with a hexagonal handle having no decorative terminal. Later in the century came the “rat-tail,” so-called because of a projection on the back of its bowl, which was now elliptical in shape.

The 18th Century brought in a narrower bowl and a less flattened stem. By the middle 1700’s, handle tips and bowls both became more pointed.

Thus, in the spoon on the extreme left, whose maker worked in Philadelphia about 1793, we have the slender handle with pointed end. Bright cutting, also a popular form of ornamentation, appears on the next spoon, made in New York in the early 19th Century.

The third spoon has the “coffin-lid” handle, thought to have been given to relatives and friends of the deceased instead of the usual mourning ring, but probably so named because of the shape. The fourth spoon, made in the last decade of the 18th Century is by Thomas Revere, brother of Paul. The fifth, with shell-shaped bowl, is one of the novelty spoons designed for sugar and from the shape of its handle might date anywhere between 1840 and 1850. The doll’s spoon at the top was also made about 1850.

Spoons with handles like the shell sugar spoon are late but artistic in outline.