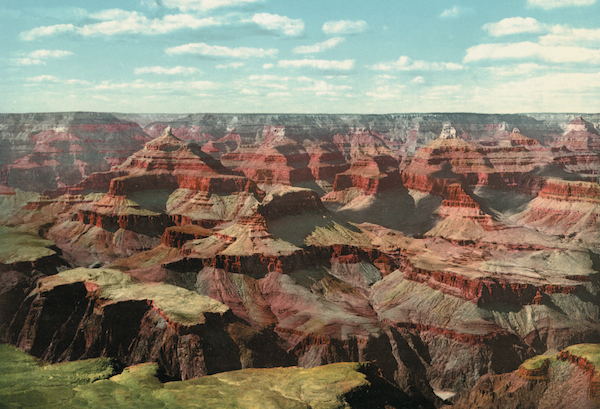 Every few centuries, someone rediscovers America. After the first humans arrived from Asia roughly 15,000 years ago, Vikings touched down in Newfoundland in the year 1000. Half a millennium later, Christopher Columbus spotted a small island in what is now the Bahamas, and in 1769, Gaspar de Portolà was the first European to gaze upon San Francisco Bay, whose indigenous people had remained hidden behind a thick wall of fog throughout most of America’s Colonial era.

“Photochroms were a European invention.”

Thirty years ago, a Frenchman named Marc Walter rediscovered America once again when he happened upon an old color photograph in a Paris flea market. “He didn’t know what it was, so he asked the seller,” says Sabine Arqué, who has been friends with Walter for decades. “The seller didn’t know, either,” she continues. “He said, ‘It’s just a color photograph.’ They were worth nothing at the time so the seller pulled out his cache and said, ‘Come, take the lot. I can’t sell them.’ That was the beginning of his collection.” 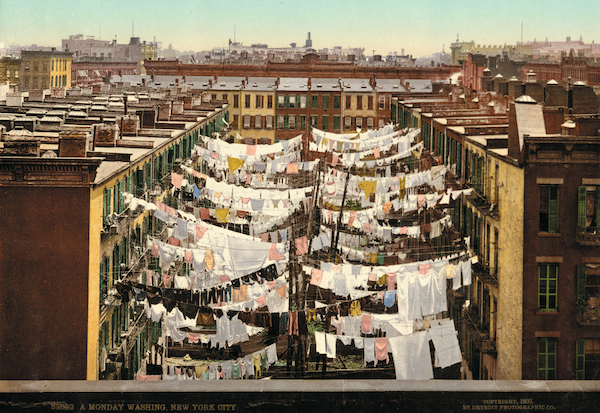 Top: The view of the Grand Canyon from O’Neill’s Point, from a black-and-white negative by William Henry Jackson. Above: “A Monday Washing New York City,” photographer unknown, circa 1900.

Walter soon learned that his newly acquired photographs were actually Photochroms, which he began collecting in earnest. Now, just some of the North American portion of his collection is the subject of a new 612-page, 15-pound Taschen book, co-authored by Walter and Arqué, called An American Odyssey: Photos from the Detroit Photographic Company 1888–1924. Showcasing  of Walter’s horde, American Odyssey is packed with hundreds of Photochroms and Phostints (the brand name for the Detroit Photographic Company’s Photochrom postcards), as well as their black-and-white source images, which were taken by such esteemed late-19th- and early-20th-century American photographers as William Henry Jackson, Lycurgus Solon Glover, and Henry Greenwood Peabody. Together, these photographers cataloged the natural and man-made marvels of the continent, bringing their cameras from the great cities of the Northeast and Upper Midwest to the mountains and deserts of the still-wild West.

Photochroms were a European invention, which is why a vendor in a Paris flea market had so many of them that he was practically giving them away. They were the creation of a Swiss lithographer named Hans Jacob Schmid who, in 1888, devised the earliest example of commercially viable color photography, although the process is actually a hybrid of traditional photo-developing techniques and stone lithography. 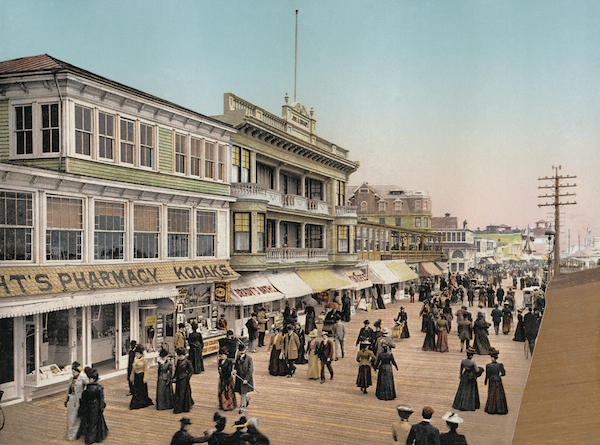 The Atlantic City boardwalk, shortly after its construction in 1898.

“They start with a black-and-white negative,” explains Arqué, “which is exposed on lithographic stones, as many as are needed.” Four stones—one each for red, yellow, blue, and black—were the minimum for most Photochroms, but some were created using as many as 14 stones when subtleties in color were required. Each stone was individually inked and its image, or piece of an image, was transferred to a sheet of paper, which was printed layer by layer until a full-color version of the scene originally captured in black-and-white was revealed.

By all rights, the Swiss technology never should have found its way to the American city of Detroit, but love and money intervened. As Walter and Arqué describe it in their book, the connection was made in the 1890s, when a young businessman from Switzerland named Rodolph Demme came to Detroit to seek his fortune, which may or may not have included his decision to marry the daughter of one of the city’s wealthiest families. Returning to his native country in 1894 for a honeymoon with his new bride, Demme met Heinrich Wild, one of the directors of Photoglob Co. Zurich, which was then the world’s largest publisher of Photochroms.

While working for DPC, William Henry Jackson traveled to Cuba after the Spanish-American War of 1898 to take photographs, including this one, for the company. This Photochrom shows the sugar-cane harvest being weighed.

Wild had grand ambitions for his company’s Photochrom technology, establishing a branch of the Swiss firm in London and setting his sights on the United States. For his part, Demme was an early fan of photography and saw the business opportunity of distributing this colorful new format in North America. By the fall of 1895, the two men had agreed to establish the Detroit Photochrom Co. (DPC), with $20,000 in seed money provided by Photoglob and the addition of an American photographer named Edwin Husher to DPC’s management team.

Husher was sent to Switzerland to learn the Photochrom process. Upon his return in the spring of 1896, he learned that Demme had embezzled most of the money earmarked for the new Photochrom plant in Detroit. It took a year for the struggling firm to regroup, but by 1897 it had canned Demme, found new financial backers, and contracted for the services (and purchased the archives) of acclaimed American photographer William Henry Jackson. 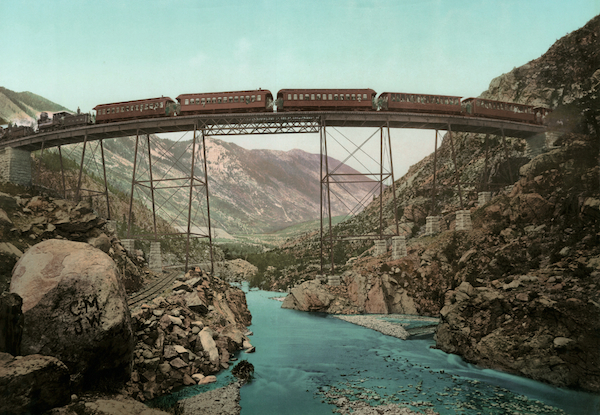 More than anyone, Jackson made the Detroit Photographic Co., as it was now called, the publishing titan it would become at the turn of the 19th and 20th centuries (later, DPC would change its name one last time to Detroit Publishing Co.). Jackson was intimately involved in the company’s growth, and since black-and-white negatives were the raw materials of Photochroms, the 10,000 negatives he had accumulated since the 1870s could all be updated in beautiful, living color. For example, back in 1872, Jackson’s black-and-white photos of Yellowstone were instrumental in spreading the word of its natural wonders and making it America’s first national park. Now people without the means to visit Yellowstone could finally picture it for themselves.

And picture it they did, thanks in no small part to the coincidental passage of the Private Mailing Card Act of 1898, which lifted the government’s monopoly on pre-stamped postcards, permitting citizens to send postcards produced by private publishers like DPC through the mail for a penny. Until 1907, messages on postcards were only permitted on the fronts of these cards (the cards’ backs were reserved for the address and postage), but a ruling that year by the United States Postal Service allowed the backs of postcards to be divided with a message on one side and an address on the other, leaving the front entirely free for Jackson’s vividly colored images. 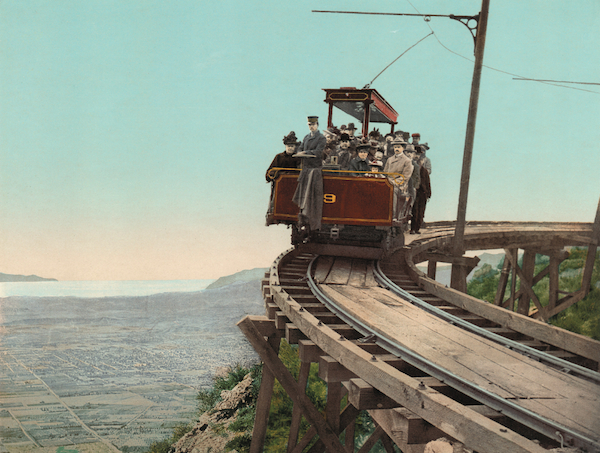 The circular bridge on the Mount Lowe Railway, California, by William Henry Jackson.

Of course, transforming Jackson’s black-and-white negatives into color Photochroms presented a challenge to the printing technicians in Detroit who, like most people, had never been to places like the Grand Canyon. How were they to know which shades of red, yellow, and blue belonged in a photograph of, say, the famous view of the canyon from O’Neill’s Point? Until then, the only images they might have seen would have been in black-and-white.

Fortunately, Jackson was not only an accomplished photographer, but a skilled painter, too. “Jackson did some watercolors when he was in the field,” says Arqué. “He always took his color box with him, and he made many sketches in color when he was shooting his photos. So the technicians in Detroit actually used many of Jackson’s sketches to get the colors right.”

To get their story on the places depicted in American Odyssey right, Walter and Arqué had to brush up on their U.S. history since they both live in France and Arqué has only been to New York and Minneapolis, which is the home of The American Photochrom Archive. “I had to go back to my youth when I was a student and learn all about American history again,” admits Arqué. “It was like rediscovering the face of America. Every Photochrom had a story behind it, and sometimes it seemed like the people were going to jump right out of the photos. For me, they became living images from a place where time has not passed, even though, of course, in reality it had. That’s the poetry of the Photochroms, this double vision.” 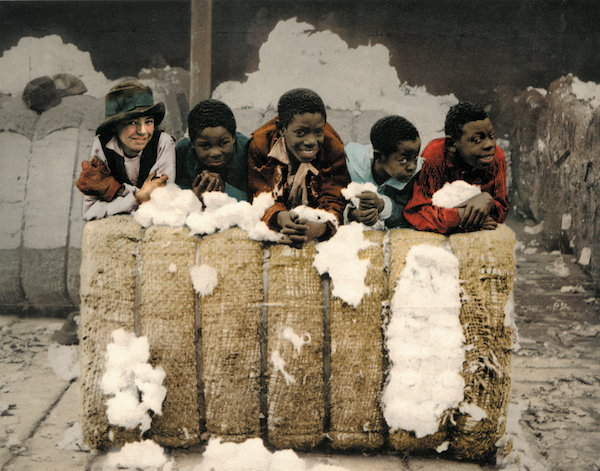 Boys pose in a cotton shed in Mississippi, circa 1900.

In some cases, those stories were simply to explain some of the book’s more curious images, such as the shots of passengers crowded onto an open-air car of the Mt. Lowe Railway as it races around a vertiginous track—the electrified train was one of the biggest tourist attractions in Southern California prior to World War II. In other cases, Arqué found herself moved by some of the reporting of the day, particularly in the Photochroms of New York City, which naturally include photographs of landmarks like the Statue of Liberty but also the city’s tenements. To give these images context, she cites Jacob Riis, whose How the Other Half Lives: Studies Among the Tenements of New York from 1890 opened the nation’s eyes to the unconscionably squalid conditions endured by New York’s most recent waves of European and Chinese immigrants.

For the most part, though, DPC’s postcards and prints focused on an idealized America, from the leisure of canoeing in New York’s Adirondacks to the tourist spectacle of rain dances performed by Zuni Pueblo Indians. 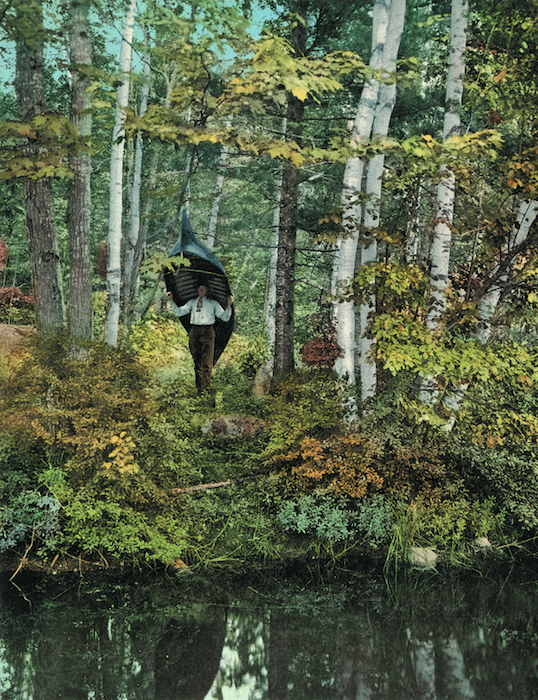 An Adirondack outdoorsman carrying his canoe.

That’s what sold postcards, and by 1905, DPC was selling a lot of them, enough to support a staff of 40, with outlets in New York and Los Angeles. Between 1899 and 1905, DPC’s catalog grew to include 1,600 American scenes, from small postcards to poster-size “Mammoths.” They even sold black-and-whites (they owned all those Jackson negatives, so why not?). In a good year, DPC printed some 7 million images.

The first decade of the 20th century was also when DPC joined forces with one of the biggest mythologizers of the American West, the Fred Harvey Company, which had built a string of restaurants and hotels along the route of the Atchison, Topeka and Santa Fe Railway, as well as other lines. Harvey ordered hundreds of thousands of DPC Phostints, which were sold in hotel gift shops to guests, alongside the jewelry, blankets, and baskets the company commissioned from the photogenic native populations. 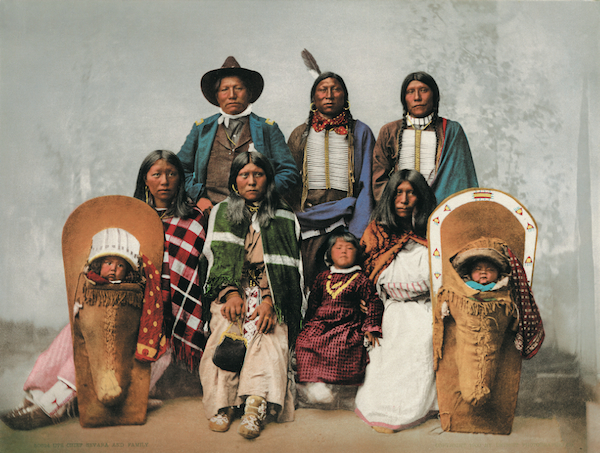 Ute Chief Sevara and his family.

By the second decade of the century, though, Photochroms and Phostints were losing their luster, in part because of competition from publishers whose offset-lithographed products cost much less than DPC’s, but also because of World War I, which diverted resources to the war effort. After the war, in 1920, American was gripped by recession, which forced DPC into receivership in 1924, when its inventory of 40,000 negatives were sold. Some ended up at the State Historical Society of Colorado but most now reside in the Library of Congress, including 25,000 negatives, 300 Photochroms, and 900 glass plates by William Henry Jackson.

Many of those images can be accessed via the Library of Congress’s website, which means that between online archives and the curated marvel that is An American Odyssey, we all have the opportunity to rediscover America for ourselves.

(All images courtesy Marc Walter/Taschen. If you buy something through a link in this article, Collectors Weekly may get a share of the sale. Learn more.)

How Linen Postcards Transformed the Depression Era Into a Hyperreal Dreamland