Flashback: Virginia Families and Their Silver

This article describes various silver items owned by families in Virginia prior to 1800, such as snuff boxes, watches, and plate. It originally appeared in the April 1941 issue of American Collector magazine, a publication which ran from 1933-1948 and served antique collectors and dealers.

The exhibition of silver owned by families of Virginia, made prior to 1800, recently held at the Virginia Museum of Fine Arts, Richmond, throws factual light on the silver owned by these families and provides a wealth of definite information for collectors. 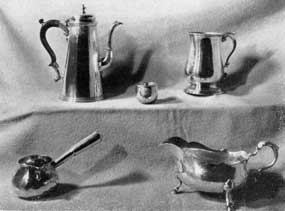 The particular interest in arranging the exhibition was to bring to light and place on record those beautiful and important pieces owned and inherited by the citizens of this Commonwealth, thus forming a gallery of American origin and one of British origin.

These items of silver serve as an illustration of the mode of life in Virginia during the colonial and federal periods. Of the various classes of people in the Commonwealth, the wealthy plantation owners were the only persons able to afford fine things they felt the ties with the mother country very strongly. Our investigations further substantiated the theory that these owners — keeping cash balances in England — bought their household articles, tables, chairs, draperies, silver, and so forth, direct from the mother country. Hence, we find the vast majority of inherited plate is of British origin.

Generally speaking, the silver, owned by inheritance, of pre-Revolutionary American make came into the Commonwealth through intermarriages of Virginians of a more recent date with persons of the Northern States. Undoubtedly, many pieces of the federal period were acquired by those Virginians who journeyed to Philadelphia and the North at the time of the Continental Congress and the early days of our republic.

In this latter group, we find a lovely oval teapot, where the curve of the wooden handle is very nicely carried through by that of the spout, marked I. Letellier, a Philadelphia “smith,” and engraved L.D. for Lucy Daniel. Inherited in the same family is a circular coffeepot with beaded decoration and gallery, by Joseph Anthony, Jr., also of Philadelphia (1783-1844). 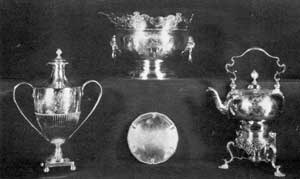 Of great historical importance was a plain camp mug, bearing the crest of George Washington, made by Richard Humphreys of Philadelphia (adv. 1772). Christian Wiltberger (Philadelphia, 1770-1851) was the maker of an imposing coffee urn, fluted and with lions’ heads, with rings for handles, which formerly graced the sideboard at Westover, the estate of the Byrd family.

A typical, covered sugar urn, also marked C. Wiltberger, was exhibited. A descendant of the Hawes family of King William County, Virginia, exhibited an Adam style cream pitcher made by Daniel Dupuy (Philadelphia, circa 1790). The Cocke family exhibited a large stirrup cup (maker unknown), and a beautifully plain, large tankard, decorated with classical moldings, marked R. Green (Boston, 17071777). George Mason, the author of the Bill of Rights, was represented by a mug, marked C. A. Burnett of Alexandria, Virginia.

The most outstanding piece, which found its way to the Commonwealth in more recent years, was the covered butter dish with gracefully curved “keyhole” handles and feet, marked Revere, the mark of that famous horseman-patriot-silversmith, Paul Revere. This national hero was well represented by five other pieces: a porringer with keyhole handle, a circular teapot and a cream pitcher, both with beaded decoration, a beautiful gravy boat (incidentally one of a set of four), and a graceful goblet (also one of four).

The two earliest pieces of American origin were the Davenport tankard by Jeremiah Durnmer (Boston, 1645-1718), and the rattail spoon with trifid end, marked for John Coney (Boston, 1655-1722). The latter is initialed I.N. for John Norton, whose descendants also lent a pear-shaped can, marked Joseph Edwards (Boston, 17071777). A very majestic, Adam style coffeepot by John Aitken (Philadelphia, working 1785-1813) was part of a tea set which is still intact. A very interesting and unusual oval, covered sugar bowl with ring handles was the one marked W. G. Forbes (New York, circa 1773). Excelling in design was the oval tea set by Garret Schanck (New York, directory 1791), which was beautifully engraved (see Cover). 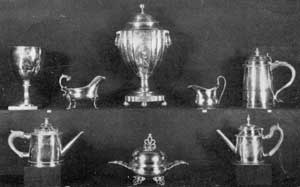 Few pieces of even possible Virginia origin were submitted. That there were silversmiths active in the Commonwealth in the 17th and 18th Centuries we know, mainly through their advertisements. Two of the pieces of hollow ware that came to light, and that have greatest possibilities of being authenticated, were an oval snuffbox with a large cabochon agate set in the top, engraved Mann Page, and with a maker’s mark W.S. and a small brandy warmer, marked I.G., in an oval, which we hope to prove was the work of James Geddy of Williamsburg, Virginia. It may be well to note that this spelling of his name is now established by his own signature, receipting a bill rendered to Colonel Preston in 1772, which recently came to our attention. Unsigned, but unquestionably made in Virginia about 1760, was the bracelet of five miniatures set in gold, originally owned by Mrs. Gabriel Jones, the wife of that famous lawyer of the Valley of Virginia. Many spoons, buckles, and so forth, were exhibited, which we hope will become clues to the identity of the early Virginia “smiths.”

As previously mentioned, the vast majority of plate owned by the 17th- and 18th-Century Virginians was of British origin. Some of these pieces are outstanding and of considerable importance. The frontal of the crown given, in 1677, by Charles II to the Queen of the Pamunkey Indians, in acknowledgment of their superiority over the Powhatans, is well known, being on exhibition at the John Marshall House in Richmond, Virginia. The diminutive hunting cup (circa 1680) , given by the same royal personage to his close intimate, Sir William Temple, and brought to, this country by the latter’s nephew, Joseph Temple, who settled at Ayletts, King William County, Virginia, is not so well known but is of equal importance. This cup, which is only an inch and three-quarters in height, is engraved with an oak tree, three crowns and the motto of the Society of the Royal Oak, while about the rim appears — very worn — the lettering that surrounded the pound sterling during the reign of Charles II.

A flat, oval snuffbox, formerly owned by Benjamin Harrison of Wakefield, bears the London date-letter for 1677, while Nathaniel Harrison, of Brandon, Virginia, was represented by a tripod gravy boat with Vandyked rim (London, 1718) . Another early piece was the plain cup (London, 1722, by William Sprockman) which was carried by the Reverend Emmanuel Jones, (Petsworth Parish, Gloucester County, Virginia) and used by him as a chalice from which he administered the wine of the Holy Communion to those of his parish who were sick. It was rather interesting to be able to exhibit two pieces of silver, formerly owned by the Huguenot, Edward Jaquelin (1668-1739), who settled in Jamestown in 1685; and, at the same time, exhibit not only his portrait but those of his wife and children (painted circa 1725) . One piece was a coffeepot, the shape of a section of a cone with moldings at top and base and a scroll, wooden handle, bearing the London mark for 1732 (Joseph Smith having been the maker); the other was a tazza, engraved with a nag’s head — the Jaquelin crest — bearing the London mark for 1723. 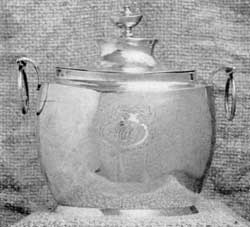 Covered Sugar Bowl by W. G. Forbes: This piece, with ring handles, is most unusual. Forbes worked in New York City where, in 1773, he was made a freeman.

One of the most imposing pieces was the handsome monteith, bearing the arms and crest of the Garlick family, which showed medieval influence in the design of the crownlike, movable rim. Bearing the same crest, but at present owned by another descendant, was the lovely pear-shaped pitcher. Both were made in London by Fras Spilsburg, the former 1733, the latter 1734.

Three generations of John Tayloe’s, of Mt. Airy, Richmond County, Virginia, and the Octagon House in the District of Columbia, were adequately represented. The earlier Colonel John (1687-1747), owned an interesting ladle with wooden handle (London, 1738, by George Jones). The outstanding pieces owned by his son John (1721-1779), were a large octagonal tea, caddy (London, 1771, by Burrage Davenport) and a unique pie server of cutout scroll pattern (London, 1767). The grandson, Colonel John (1771-1828), who apparently only marked his silver with the crest instead of the coat of arms as had his father and grandfather, was represented by a fluted wine funnel (London, 1791) and a toddy warmer (London, 1793).

One of the most important pieces arrived too late to be included in the catalogue. It was the gold watch originally owned by that extremely wealthy Virginian, Robert “King” Carter of Corotoman, Lancaster County, Virginia. This handsomely engraved timepiece was made in 1711, by the so-called father of English clockmaking Thomas Tompion of Fleet Street, London, — who, incidentally, is one of the two clockmakers to be accorded the distinction of burial in Westminster Abbey.  A granddaughter, Anne Carter, of Cleve, King George County; owned the very handsome kettle-on-stand, made in London by William Grundy in 1749.

Inherited from Mrs. Nelson, mother of General Thomas Nelson of Yorktown, Virginia, was a typical George II repousse teapot of inverted pear-shape, with an eagle-beak spout (London, 1751), and a very early tripod salt (London, 1739). A gold snuffbox was exhibited containing the miniature of Lord North, which was given to Thomas Nelson —who was a signer of the Declaration of Independence and a governor of this Commonwealth — in appreciation for saving the life of his lordship’s son while Nelson was at school in England. 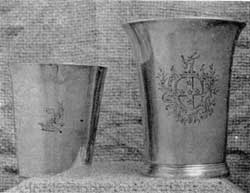 Among the pieces inherited through the Custis family was an extremely graceful, two- handled, covered cup on ball feet (London, 1774, by John Carter), engraved with the Custis arms and crest, and which formerly graced Mt. Vernon. Bearing the Fitzhugh arms was a lovely salt, with repousse decoration of spiral fluting (London, 1764, by Robert and David Hennell) , and a salver with shell-and-scroll border (London, 1763, by Thomas Harmann and Richard Mills).

A dignified punch bowl (London, 1786, by Edward Fennell) was engraved with the arms of Charles Carter of Shirley Charles City County, Virginia, on one side and with his prized horse, Nestor, on the other. The same family exhibited an unusually large brandy saucepan with wooden handle (London, 1750) which attracted considerable admiration.

The only beaker in the exhibition bore the arms of the prominent Randolph family (London, 1752). A pear-shaped coffeepot, with gadroon decoration and an eagle-beak spout (London, 1765, by Thomas Whipman and Charles Wright) was engraved with the crest of the Byrd family. A covered sugar bowl (London, 1789) of inverted pear-shape and floral repousse decoration and engraved with the Jennings arms, has the rare distinction of being an inherited piece that was made by the now very popular Hester Bateman.

In time, the museum hopes to be able to present an even more comprehensive showing of Virginia owned and inherited silver. While a tremendous amount of this plate has disappeared through fires and wars, shortness of time prevented a more complete survey of the historic pieces owned in the Commonwealth from being assembled. 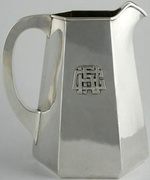 The Kalo Shop, a Mecca for Arts and Crafts Sterling SilverSmall But Useful American Silver 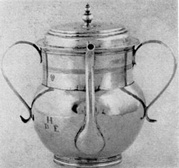