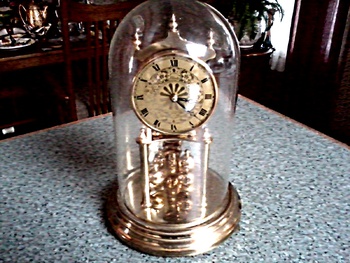 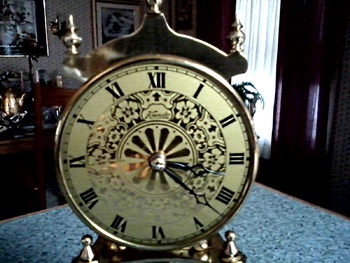 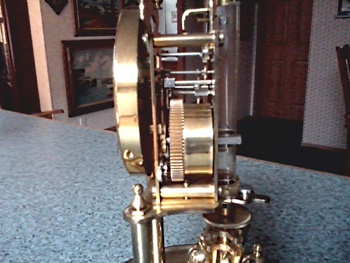 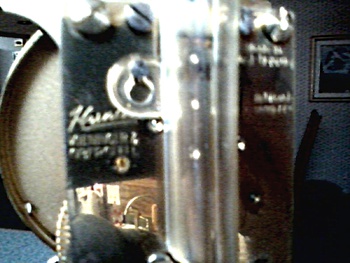 I've always wanted one of these because my grandmother had one. I loved watching it as a child and had hopes she'd leave it to me, but it just disappeared after she died. I have an electronic one that's all plastic I bought at Penney's 10 years ago but it's not the same. I searched this one online but it seems smaller 8-9" tall, so this may be one of their miniature versions. Also the dates say mid to late 50's but I think this one could be a bit later. It's glass dome is perfect and it's pretty clean, just a bit of brass tarnish from handling. The suspension wire seems fine and it's encased in a plastic tube. There is a locking lever for transport which wasn't engaged when I bought it . The pendulum was out of it's center support well too. I can't wind it as there is no key. I have two keys from other clocks but one is too big and the other is too small . Darn it ! They're on Ebay for a few dollars so no problem getting one. Just have to wait a bit longer to see if it runs. -Mike-

Kundo is a trademark name of Kieninger & Obergfell, a German clock manufacturer. The Kundo 400 Day Clock is a torsion pendulum clock. It is called an anniversary clock as a suggestion that you choose a meaningful date, such as the anniversary of the date you received it, as a reminder to wind it each year. If you forget, the clock will run for 400 days without winding. There are two versions of the Kundo Anniversary clock -- one with a fixed pendulum that you release in order for the clock to start operating, and one with a removable pendulum that you hang in place.