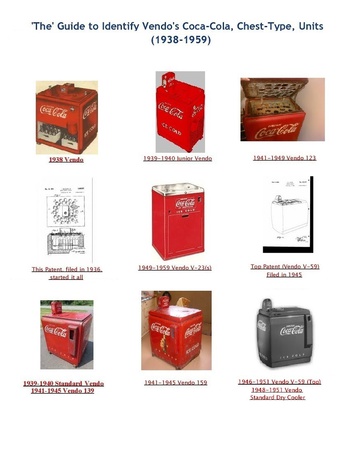 While doing research to identify a friend's purchase of a Coca-Cola chest vending machine in Feb. of 2013, it appeared that a lot of the info on the web, relating to chest-type only machines, was very confusing. So I started doing my own historical study to see if I could clear up the confusions. The chest-type units are the oldest of the soda vending machines and Vendo the most famous.

The actual historical facts turn out to be quite a bit different than what I've been finding on the web and reading in books that I've purchased. It's understandable, because these sources deal more in generalities, rather than focusing on specific information.

Collectors and people who are interested in owning (or actually own) an old Coca-Cola vending machine, mostly for nostalgic reasons, would like to know it’s proper model name and close year of manufacturing.

I decided to write-up 'The' Guide to help anyone seeking to accurately identify an old Vendo manufactured, chest-type, unit. You could also use it if you’re looking to purchase one and want to know what model came from a certain year range.

It certainly is not a professional presentation, but it is very useable. Here is the link, you can judge for yourself. It’s free, no strings attached.
https://sites.google.com/site/vendotoolbox/

By-the-way, my friends machine turned out to be a Vendo 159 Top mounted on a Westinghouse Standard chest. It was manufactured during WWII, 1941-1945.

Hope this helps and have a good one.

p.s. – This is the first public release.