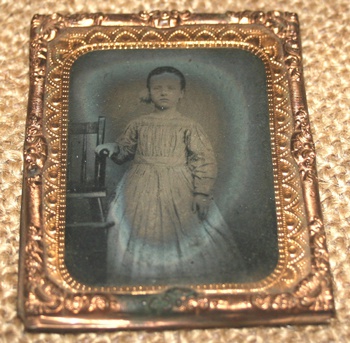 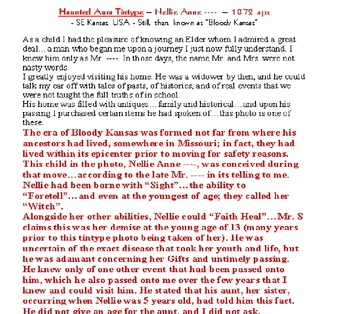 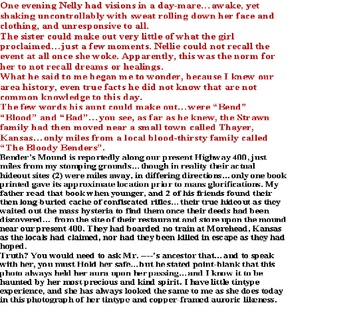 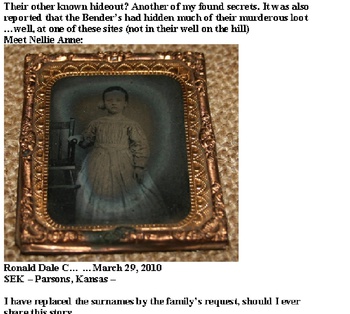 Just in case making the story document into JPG doesn't view right...here's the story I was told, and addition of info rare have concerning some of the most blood thirsty people around here...in the 1800's - Get ready to hear of ghosts, witches, and murderers. I mention Bloody Ks as if Nellie had lived through it. Indeed that era was "healing"....not forgotten

As a child I had the pleasure of knowing an Elder whom I admired a great deal…a man who began me upon a journey I just now fully understand. I knew him only as Mr. ----. In those days, the name Mr. and Mrs. were not nasty words.

I greatly enjoyed visiting his home. He was a widower by then, and he could talk my ear off with tales of pasts, of histories, and of real events that we were not taught the full truths of in school.

His home was filled with antiques…family and historical…and upon his passing I purchased certain items he had spoken of…this photo is one of these.

The era of Bloody Kansas was formed not far from where his ancestors had lived, somewhere in Missouri; in fact, they had lived within its epicenter prior to moving for safety reasons. This child in the photo, Nellie Anne ----, was conceived during that move…according to the late Mr. ---- in its telling to me.

Nellie had been borne with “Sight”…the ability to “Foretell”…and even at the youngest of age; they called her “Witch”.

Alongside her other abilities, Nellie could “Faith Heal”…Mr. S claims this was her demise at the young age of 13 (many years prior to this tintype photo being taken of her). He was uncertain of the exact disease that took her youth and life, but he was adamant concerning her Gifts and untimely passing.

He knew only of one other event that had been passed onto him, which he also passed onto me over the few years that I knew and could visit him. He stated that his aunt, her sister, occurring when Nellie was 5 years old, had told him this fact. He did not give an age for the aunt, and I did not ask.

One evening Nelly had visions in a day-mare…awake, yet shaking uncontrollably with sweat rolling down her face and clothing, and unresponsive to all.

The sister could make out very little of what the girl proclaimed…just a few moments. Nellie could not recall the event at all once she woke. Apparently, this was the norm for her to not recall dreams or healings.
What he said to me began me to wonder, because I knew our area history, even true facts he did not know that are not common knowledge to this day.

The few words his aunt could make out…were “Bend” “Blood” and “Bad”…you see, as far as he knew, the Strawn family had then moved near a small town called Thayer, Kansas…only miles from a local blood-thirsty family called “The Bloody Benders”.

Bender’s Mound is reportedly along our present Highway 400, just miles from my stomping grounds…though in reality their actual hideout sites (2) were miles away, in differing directions…only one book printed gave its approximate location prior to mans glorifications. My father read that book when younger, and 2 of his friends found their then long-buried cache of confiscated rifles…their true hideout as they waited out the mass hysteria to find them once their deeds had been discovered… from the site of their restaurant and store upon the mound near our present 400. They had boarded no train at Morehead, Kansas as the locals had claimed, nor had they been killed in escape as they had hoped.

Truth? You would need to ask Mr. ----’s ancestor that…and to speak with her, you must Hold her safe…but he stated point-blank that this photo always held her aura upon her passing…and I know it to be haunted by her most precious and kind spirit. I have little tintype experience, and she has always looked the same to me as she does today in this photograph of her tintype and copper-framed auroric likeness.

Their other known hideout? Another of my found secrets. It was also reported that the Bender’s had hidden much of their murderous loot …well, at one of these sites (not in their well on the hill)

I have replaced the surnames by the family’s request, should I ever share this story 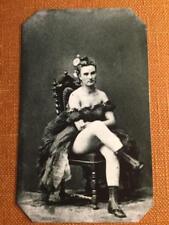 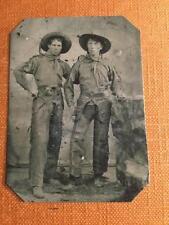