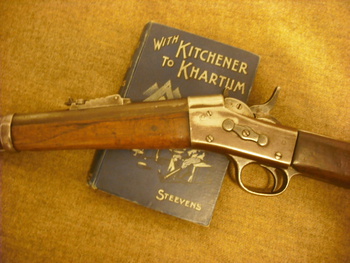 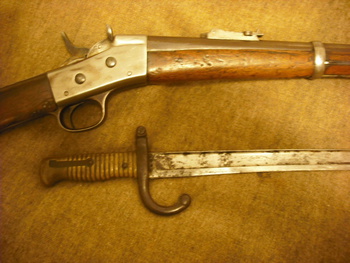 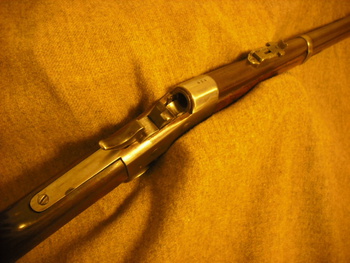 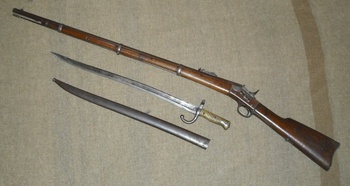 I thought this firearm might make a good transition piece between my recent posts of guns related to the British Empire and some future posts of American guns.

The Remington Rolling Block (In this case the “Remington No. 1 Military Rifle”), was a single shot black powder cartridge firearm featuring a “rolling” breach block. It was too late for the American Civil War, but it made a huge hit at the 1867 Paris Exhibition, resulting in numerous orders from governments around the world. At the exhibition, Sam Remington was invited by emissaries of the Khedive, Ismael Pasha of Cairo, to come to Egypt to show his new rifle. The Khedive was so impressed that he not only ordered the rifle for his army, but gave Remington a plot of land in Cairo where he built a small palace. The first shipments were diverted for the Franco-Prussian war, but by 1875 the Egyptians were receiving large quantities of the rolling block.

Egyptian rolling blocks saw quite a bit of action, but the most well-known may be in the Sudan, where a retired British Colonel named Hicks lead an Egyptian Army of about 11,000 soldiers against the rebel forces of Mohammed Ahmed, the self-proclaimed “Mahdi” (prophesied redeemer of Islam). Colonel Hicks would have done better spending his retirement growing roses. Instead, he and almost his entire command got wiped out, and now the Mahdi’s rebels had a whole bunch of these Remingtons. This made matters even worse for Charles Gordon, Aka “Chinese Gordon” Aka “Gordon of Khartoum”, when he was besieged by the Mahdi’s Forces some time later. Reluctantly, the British sent a relief force that arrived two days too late to keep Gordon’s head from being hung in a tree.

General Kitchener would eventually defeat the successor to the Madi, Abdullah al-Taashi, in the battle of Omdurman in 1898. Among the British troops was a young Winston Churchill. At this stage of his career Kitchener actively courted the press to build his reputation, and his relationship with G. W. Steevens of the "Daily Mail" resulted in the book "With Kitchener to Khartoum" that I’ve used as a backdrop here.

This Egyptian Rolling black is not in the best of shape. Much of the finish looks like it was blasted off in a Saharan sandstorm, the sling swivels are gone, there is a crude stock repair near the receiver, and the bore, while not pitted, looks awfully worn. Still, the breach mechanism looks sound and works crisply. There is a marking on the receiver indicating Egyptian police use at one time. There are also Arabic characters marked on it which I haven’t had translated.

The Egyptian Rolling Block is chambered for the .43 Egyptian cartridge. It seems that proprietary cartridges were all the rage among the trendier nations back then. Anyway, it fired a 400 grain bullet backed up by 75 grains of black powder with a muzzle velocity of 1330 feet per second. I have not fired this rifle because I’m not tooled up to make the .43 Egyptian yet – but some day.