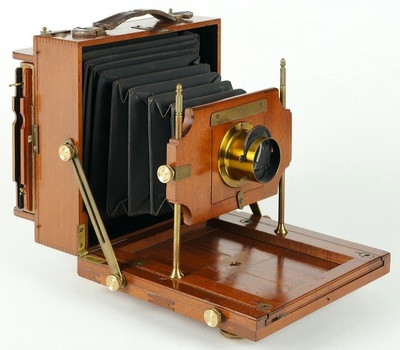 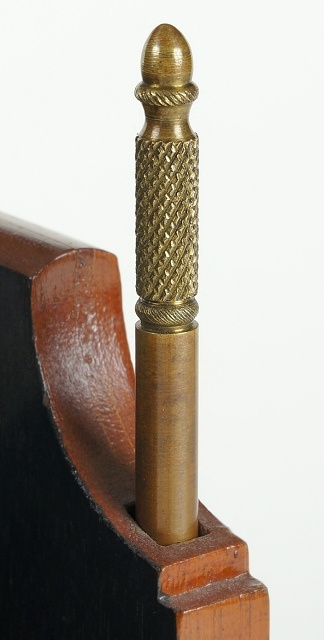 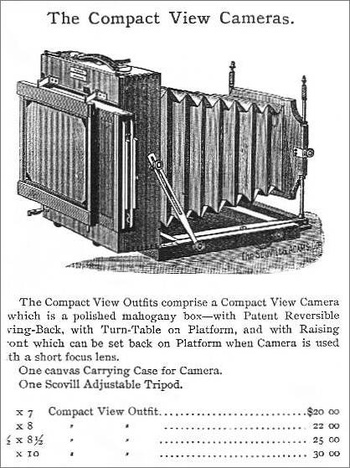 Time for another odd looking yet rare camera. The Scovill & Adams Company made a variety of interesting cameras, almost all of which are relatively uncommon today. This rarely seen Compact View is believed to be in production from 1892 to 1896. It is constructed of polished mahogany featuring a tapered bellows, lacquered brass trim, interchangeable lens board, and a reversible back to make it easy to shoot landscape and portrait images.

In an age of boxy straight lined apparatus, Scovill’s Compact View is rare and unusual, distinguished by its shaped front mounted on a pair of solid brass posts topped with beautifully milled "pineapple" decorations to grip and unscrew (or screw) the posts.

The concave quarter-round shapes at each corner of the front standard are purely ornamental and not found on any other American camera. The design was certainly a radical departure from traditional square and rectangular fronts. Looking at the front standard, I wonder what inspired this exotic look. From a manufacturing perspective, it must have been expensive to fabricate and finish yet the result is esthetically pleasing.

Realizing the problem, it appears that Scovill & Adams changed the design to a traditional (square) front standard at a later time.