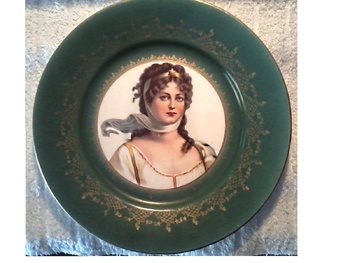 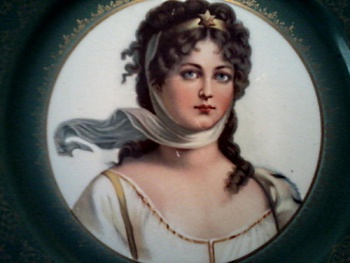 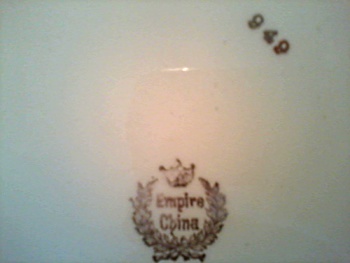 Found this beautiful lady at GW this morning. A Queen Louise Portrait Plate. The border is forest green with gilt filigree accents. The portrait in the center is a transfer reverse image of Queen Louise of Prussia after a portrait by Carl Gustav Ludwig Richter. The back of the plate carries a gold "Empire China" mark and the numbers 949. It's 9 3/4 inches in diameter. There's a small quarter inch chip to the back side and a tiny nick in the portrait but still pretty nice. This same version of the portrait appears on quite a few pieces from the late 19th century. Some are from other porcelain factories in France, Germany, and Hungary. I'm not quite sure about the exact country for this one, but I'm thinking Austria or Bavaria. There isn't much online about Empire China. Several auction sites say this mark dates from 1850-1890. -Mike-

Louisa Augusta Wilhelmina Amelia (March 10, 1776 – July 19, 1810), Queen of Prussia
The deep admiration expressed by the artist for the Queen of Prussia did not solely derive from her noble features. Queen Louisa Augusta Wilhelma Amelia von Mecklemburg Strelitz was a passionate opponent of the French Revolution and a declared enemy of Napolean. Queen Louisa openly encouraged her husband King Friedrich Wilhelm III to go to war and favoured the Russian alliance. Napolean called her "My Beautiful Enemy". A loyal admirer of the martyred Queen Marie Antoinette. '
Original painting by Carl Gustav Ludwig Ritcher 1879 Gustav Carl Ludwig Richter (1823–84)