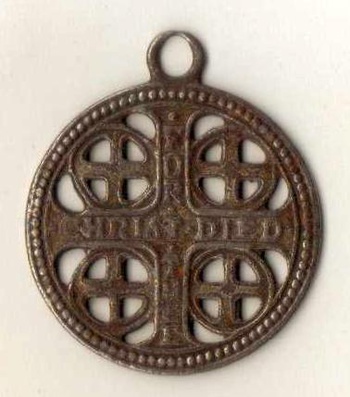 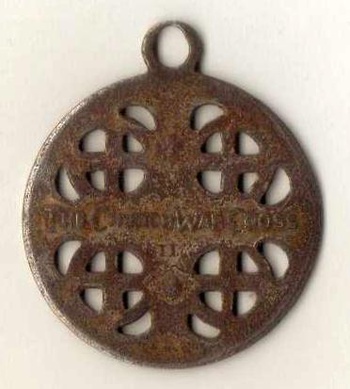 - "Church War Cross" Pendant from a World War II veteran - used
- Obverse: "Christ Died For Thee" / Reverse: "The Church War Cross - II"
- Bottom of the reverse has the maker "W & H Co." (Whitehead & Hoag)
- 1" in diameter and made of steel / the reverse is worn due to use
** The Episcopal Church Service Cross was the first cross to be approved by the military for our troops. Its circular shape prevents injuries from the ends of the arms of the cross during physical military activity. This lightweight cross is less than a quarter ounce and was often paired with A Prayer Book for the Armed Services.
*** From the Archives of the Episcopal Church about this cross: The Church War Cross was designed under the direction of Mrs. James De Wolf Perry (wife of the former Presiding Bishop and Bishop of Rhode Island) during World War I for the Army and Navy Commission of the Church. Each Episcopalian entering the Armed Forces was presented with one and the same cross was used during World War II. The Episcopal Church Service Cross carries the design of the ancient Crusader's Cross, the five-fold cross symbolic of the five wounds of our Lord Jesus Christ at his crucifixion. The words embossed upon it are taken from the Service of Holy Communion: Take and eat this in remembrance that Christ died for thee and feed on him in thy heart by faith with thanksgiving.