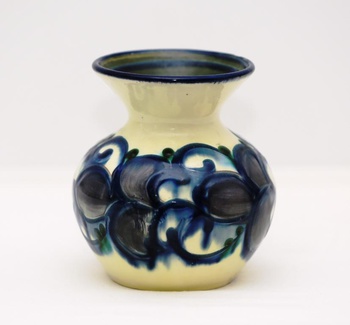 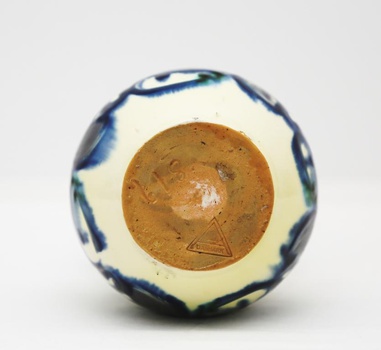 This vase comes from a pottery, Annashaab, which was located in an area in Jutland (Denmark) with several smaller potteries, the most well-known being Danico. Actually, Niels Peter Nielsen, one of the founders of Danico, was an apprentice at Annashaab and started his own pottery, Egebjerg, when he had finished his apprenticeship in 1909. Annashaab was founded in 1891 and closed in 1958. In the beginning mainly items for daily use were produced, such as jam pots, plates and even chamber pots for the local prison! However, in the 1920’s Annashaab started a line of decorative pottery in Skoenvirke style (the Danish take on Jugendstil), such as this vase. The style is very similar to what was produced at Kähler and Danico at the same time and I have to say that it can be very difficult to tell the difference! However, the cream glaze with the almost pastel decoration (blue and lilac/mauve) is typical of Annashaab. I bought this vase on a flea market where it was hiding among a lot of Kähler vases – the Kähler pottery is more sought after so you can sometimes have the lesser known pottery for reasonable prices.

Height: 12 cm /4.7 in. Mark: a triangle with the letter ‘L’, and the number 819. The triangle is thought to symbolize the ‘A’ of Annashaab and the ‘L’ stands for ‘Lervarefabrik’ (‘Earthenware Factory’). It is not unsual for Annashaab pottery to not have a mark so if you find something that looks like Kähler or Danico, but doesn’t have a mark, a good guess is that it is actually from Annashaab!