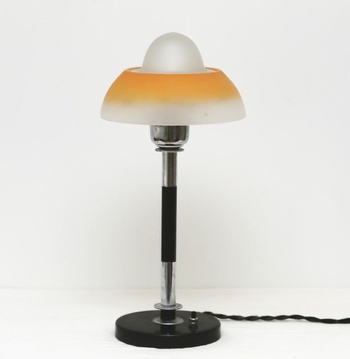 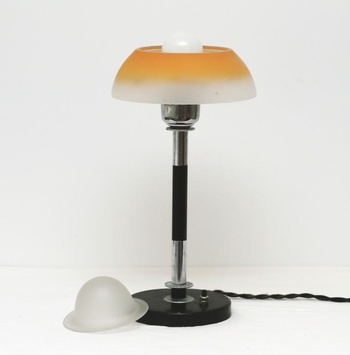 The most renowned Danish lamp company is undoubtedly Louis Poulsen, producer of, among other things, the so-called ‘PH lamps’ designed by Poul Henningsen and now to be found in very many homes in Denmark! The original PH lamps are sold today at auctions for exorbitant sums of money. But as a result of the retro wave lamps from lesser known factories are now becoming popular.

One such factory is Fog & Moerup, founded in 1904 and bought by its competitor LYFA in 1978. Fog & Moerup had its heyday in the 1950’s and 1960’s and their lamps (made of chrome, copper, or colourful plastic) from that period are quite popular today. However, their most famous lamp, ‘Kongelys’ (‘King’s light’) was designed in 1930 - originally it was named T3 Minor, but the name was changed when one of these lamps was given to King Christian X at his 25-year anniversary in 1937.

My lamp (often colloquially referred to as ‘the fried egg’) was also designed in the 1930’s. It is made of metal and has a frosted glass shade with a peach tint – as you can see in picture 2 you can take off the top in order to change the bulb. Height: 38 cm / 15 in. I believe the electrical cord is the original one. I bought the lamp rather impulsively in a store about 15 years ago and I am very fond of it!