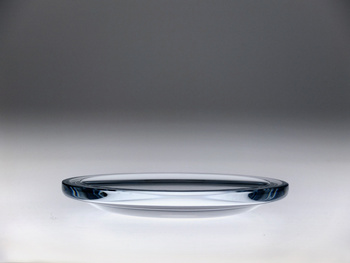 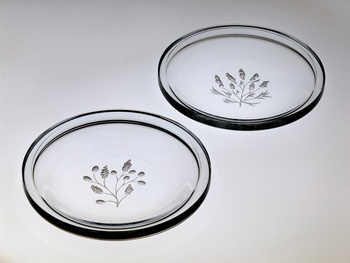 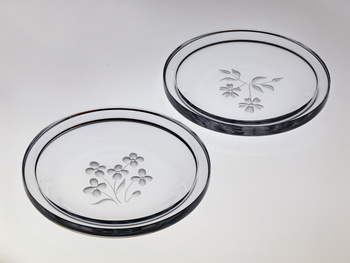 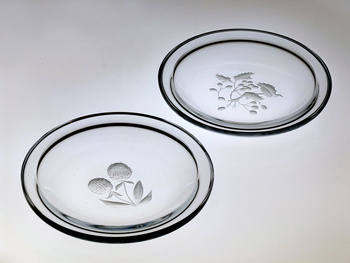 I'm glad to have these small plates in my collection. An earley design by Gerda Strömberg about 1933-35, model number A9 and 200 mm wide. But the engravings is not so old. They are made with the newer engraving method with dental drill, introduced and pioneered by Rune Strand at Kosta at the end of the 1950s. Rune was recruited to Strömbergshyttan 1963. He was not allowed to work with and develop his decoration methods as much as he wanted at Kosta, but Strömbergshyttan offered him free hands. That resulted in another new method to cut into the glass with iron tools, and also a method where you first preshape the contours of the glass and then engraves or blast, which shortened working time very much. The latter method was taken over by Mats Jonasson at Målerås, and it is still in use there.

I have not found the six floral motifs in any product catalog, but I think they are drawn in the 1960s by Rune Strand. It must be a very skilled engraver who has done the work because it's first class, perhaps Rune Strand himself, Leif Swahn or one of the other skilled engravers at Strömbergshyttan (who mastered the new engraving method very well)? I do not think engravings were made very often in small plates, and these six are probably quite rare. Perhaps they were made for special events, wedding or similar?