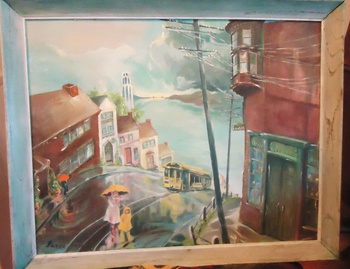 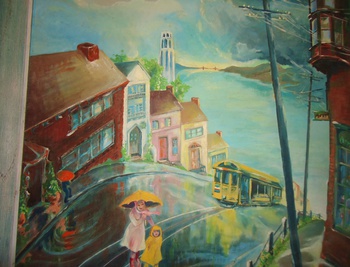 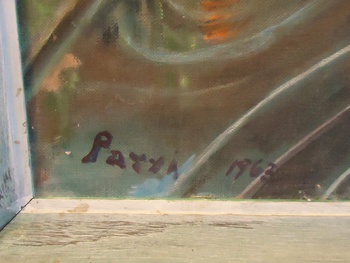 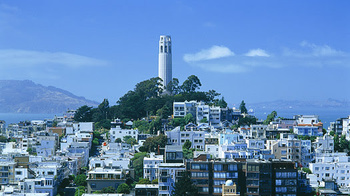 Hello! Love this Large 31" X 25", do not know artist, but sooo S. F. Mother and daughter in rain! And Coit Tower, made by woman to look like fire nozzels! She chased fires!
Coit Tower was paid for with money left by Lillie Hitchcock Coit, a wealthy socialite who loved to chase fires in the early days of the city's history. Before December 1866, there was no city fire department, and fires in the city, which broke out regularly in the wooden buildings, were extinguished by several volunteer fire companies. Lillie Coit was one of the more eccentric characters in the history of North Beach and Telegraph Hill, smoking cigars and wearing trousers long before it was socially acceptable for women to do so. She was an avid gambler and often dressed like a man in order to gamble in the males-only establishments that dotted North Beach.[4]

Lillie's fortunes funded the monument four years following her death in 1929. She had a special relationship with the city's firefighters. At the age of fifteen she witnessed the Knickerbocker Engine Co. No. 5 in response to a fire call up on Telegraph Hill when they were shorthanded, and threw her school books to the ground and pitched in to help, calling out to other bystanders to help get the engine up the hill to the fire, to get the first water onto the blaze. After that Lillie became the Engine Co. mascot and could barely be constrained by her parents from jumping into action at the sound of every fire bell. Need help with artist! toracat