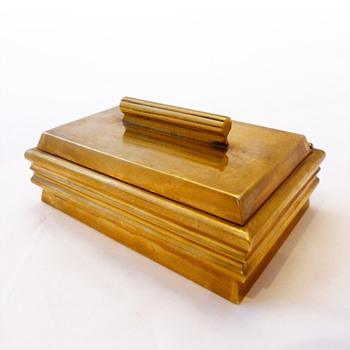 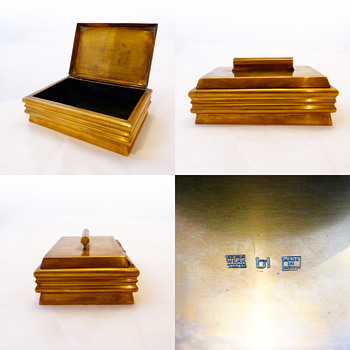 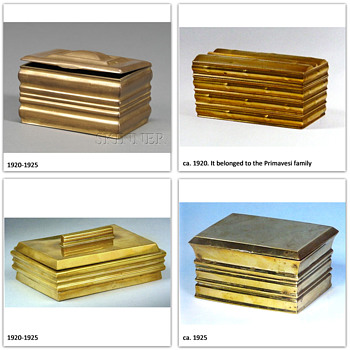 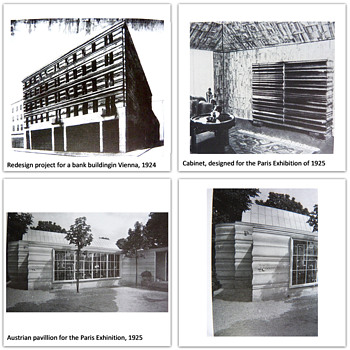 This cigarette box is made of brass and it’s covered with ebony on the inside. At the base we can see the Wiener Werkstätte stamp, the J.H. monogram for Josef Hoffmann and a Made in Austria mark. It measures 12x8’5 cm, and it stands around 5 cm (including the column shaped knob).

In 1925 Josef Hoffmann designed the Austrian Pavilion for the Paris Exhibition of 1925. This pavilion is the climax of Hoffmann’s work in a style closest to Art Déco (within a couple of years he will start working in a functionalist style and later he would create his latest buildings in the Modern Style). During this time he designed buildings whose exterior walls were covered with mouldings, which made them look like huge boxes. During the Exhibition the pavilion was described as “a box full of surprises”. You can see a couple of pictures of the pavilion on pic. No. 4.

Similar boxes were made between 1920 and 1925, and many of them were exhibited in Paris. On pic. No. 3 you can see four of them. I’ve written down the approximate date of each one of them. There’s one that looks just like ours except for the knob. In this case it isn’t a fluted column like in ours, but just a couple of shafts one over the other.

Daniele Baroni, author of the book "Josef Hoffmann e la Wiener Werkstätte" describes these boxes as "l'oggetto come microarchitettura e l'archittetura come oggetto furi scala": the object as a microarchitecture and its architecture as an object out of scale.