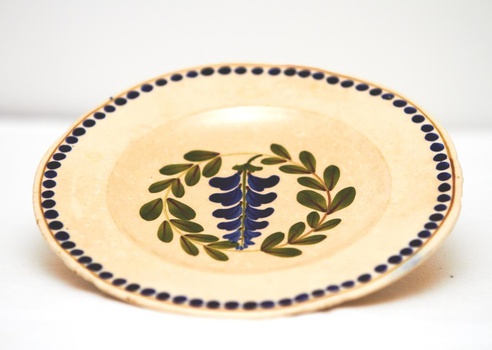 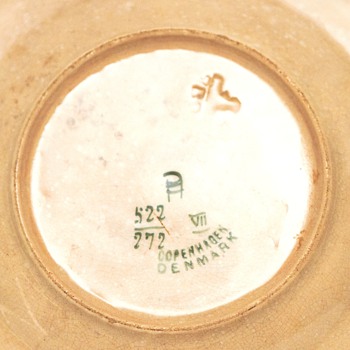 A plate with 'Blaaregn' ('Wisteria') decoration, designed in 1907 by Christian Joachim (1870-1943) who was a (Symbolist) painter and ceramist. From 1901 he was employed at the Aluminia Faience Factory (from 1969 part of Royal Copenhagen) where he designed a number of highly decorative (and successful) lines of dinnerware (one of which, 'Tranquebar', is very well known and was produced until recently). He retired in 1933. He also worked very closely with Georg Jensen, the famous jewelry designer - they exhibited their pottery at the world's fair in Paris in 1900. Oddly enough, he had only one arm, as he lost his right arm in a traffic accident when he was 6 years old. Nevertheless, he learnt how to use his left arm well and was very prolific in his career at Aluminia! In 1925 he received a grand prix at the World’s Fair in Paris.

'Blaaregn' (from 1907) is not uncommon to come across at antiques dealers or even flea markets, but 'Guldregn' (from 1903) with yellow flowers instead of blue is quite rare. The blaaregn pattern is used on a large number of different objects – jardinières, bowls, vases, dinnerware etc.

Diameter 18 cm / 5 in. Mark: The 'A' sign stands for 'Aluminia', the Roman numeral (VII) is the painter (later on, monograms were used) and the 'fraction' contains the decoration no. above the line (here 522) and the model no. below the line.