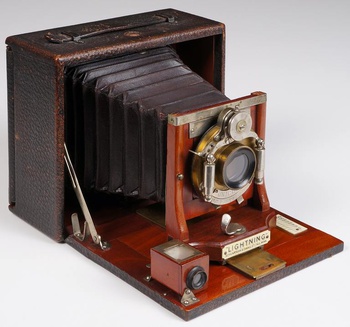 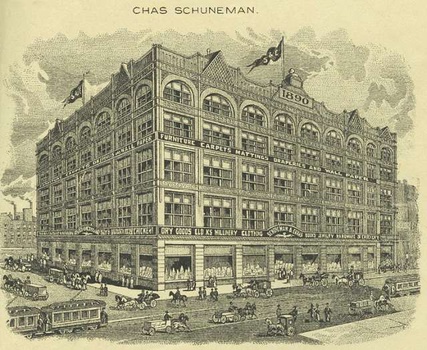 Here’s another example of a classic 1890s American self-casing camera (4 x 5 inch format). When closed, it looks like an unassuming leather covered box. When opened the photographer is greeted with a finely polished wood interior, red leather bellows and nickel plated brass hardware trim. The design is simple and lacks many advanced features; it was made for beginners.

Several years ago, I acquired this little camera for two reasons. First, how can you not like the name “Lightning”?! The second reason is it being one of a few cameras with Minnesota roots. Identifying the company was a challenge because some of the letters on the maker’s badge were rubbed out. After trying out different letter combinations I discovered “Lightning” was sold by a large St. Paul based department store named Schuneman & Evans. Started in 1890, the store became a major player here in the Twin Cities.

To some extent, the roots of this humble Schuneman & Evans branded camera lives on. In 1958, the department store merged with the Dayton Company of Minneapolis (another venerable department store). Later in 1990, Dayton-Hudson acquired the renowned Marshall Field’s of Chicago, IL and by 2000 renamed itself to Target (yes ... Dayton’s was Target’s parent company). Eventually, it all became Macy’s in 2005. In that single year, the famous names of Dayton’s, Hudsons and Marshall Field’s disappeared from the American landscape. (Whew!)

Anyhow, that’s a lot of history for this camera yet it is uncovering surprises like this that make collecting cameras so rewarding. But the research isn’t over. I’ve contacted the Minnesota Historical Society to see if they might have original catalogues listing the camera and I’m scouring my ephemera to figure out the specific manufacturer.