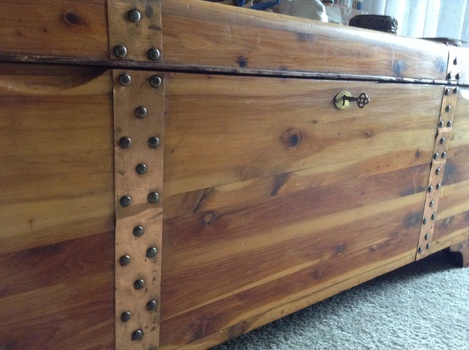 I bought this beautiful cedar chest a few years ago really cheap from someone who needed cash. Have found out that The Red Standard Cedar Co. was founded by Mr Lane's son (Lane Furniture) in 1912. Mr. Lane declined to put his name on this company at the time as he believed it would not prosper. I emailed the Lane Company in 2011 & they stated that the first few made in 1912-13 were not made all that well as they did not really have experienced help as well as not bearing any sort of serial number. They also believed that this one was most likely a first or second year chest. This company only existed for 6 years; after that they were Lane Cedar chests. Mine has obvious faults on the inside (wood not cut straight) and has no serial number. Isn't it beautiful? The key is not original however but replaced with a 100 year old skeleton key. I wonder what it's worth?