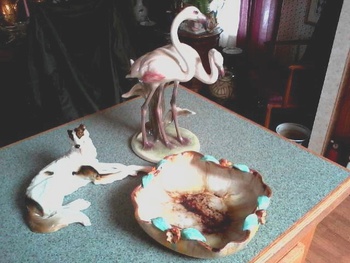 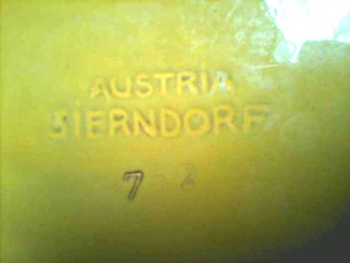 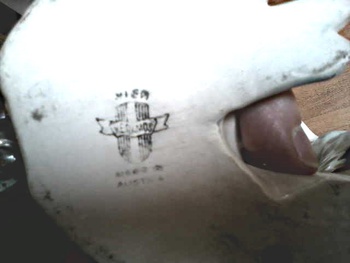 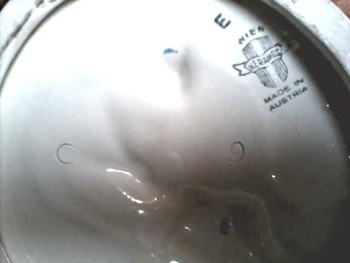 Someone must have cleaned out a little German grandmother's house because all these wonderful pieces were in the showcase at Salvation today. I could not believe the condition of these pieces. Not a single nick, chip, crack, or glue spot on any of these. The flamingos are my favorite. So delicate and graceful and sooo breakable. Yet they are perfect ! The Borzoi (Russian Wolfhound) is rather large. I have a Dalmation one by Wein Keramos that is much smaller. The dog figurines by this company seem to be quite valuable and collectible. The Sierndorf bowl is a nice piece too. Tiny little flowers accent the edges . The interior glaze has an interesting brown marble effect while the bottom is bright yellow. I believe this is a Wilhelm Thomasch piece. I found the website but it's all in German. There isn't much info about either one of these companies except that they're Austrian and produced ceramics from the 1920's through the 50's.
I had to leave one vase behind by Waechtersbach. It was a nice teardrop shape turquoise mid-century design with incised decoration, but my budget forced me to choose. Maybe it will still be there next week on sale. I know for sure these would have been gone. I wanted something special for my 800th post and I couldn't ask for more ! -Mike-

KERAMOS: WIENER KUNST-KERAMIK und PORZELLANMANUFAKTUR AG, was a Viennese art pottery ceramic and porcelain manufacture founded 1910 by several disabled ex-service man, supportived financially by the State Austria and later converted to a public limited company lead by the Director Otto Köller and Rudof Wolf und Heinrich Wolf. The company was located in the famous Hofburg building, Scharze Adlerstiege; the manufacture was located in 10th district of Vienna, Schleiergasse 17. In 1932 the company engaged more than 50 employees and they took over a large assortment of models by the sculptor Eduard Klablena and several designs of the Wiener Werkstaette / Wiener Werkstätte.
The company manufactured luxury items, Faiences, Majolica (figurines, animal sculptures, lamps, vases and trinket boxes) and was represented the the Art Exhibition in Paris in 1925 (silver medal prize).

Wilhelm Thomasch created pieces in the 1920's in Goldscheider with artists such as Dakon, Knörlein, Larroux, Lavergne, Lorenzl, Podany, Schramm, including the now coveted collector's items of wall masks, dancers, animals, children, etc., until in 1926 he independently accquired an existing pottery in Sierndorf, Lower Austria.
In addition to vases, bowls and pots traditionally produced Thomasch created in Sierndorf figural objects which still bear witness to the great artistic sense of the Master.
After the end of the 2nd World War Thomasch expanded in 1950. With up to 60 employees Thomasch was one of the largest employers in the region.
Wilhelm died in 1965. His wife Anna Thomasch, her son Herwig and brother Franz Wöginger led the operation until 1970 . With the retirement of Mrs. Thomasch the business was closed.

The site has images of pieces similar to my bowl although they are handled baskets, the glazes and the floral modeling are almost identical.