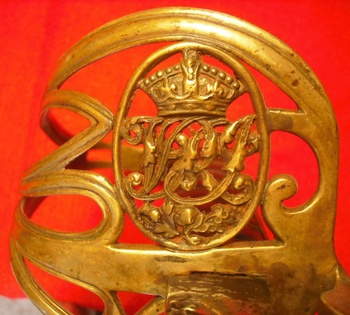 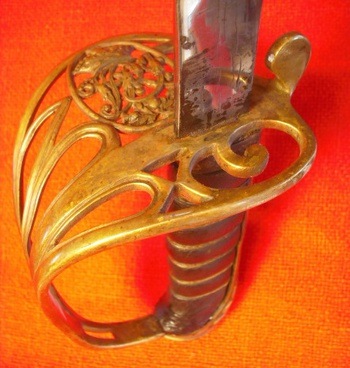 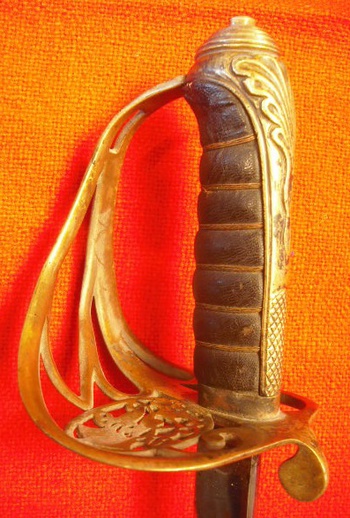 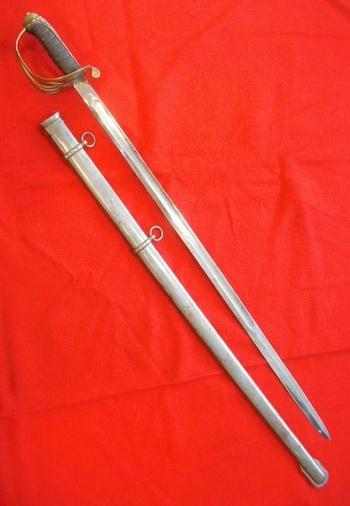 In my opinion, the British infantry officer’s gothic hilted swords of the 19th century were among the most elegant regulation swords to be produced. The gothic pattern, named after it’s similarity with gothic architectural design, was first introduced in 1822, and although other sword blade patterns were introduced, the sword hilts remained pretty much the same until they were superseded in the British 1895 pattern sword.

The cypher below the crown in the guard is “VRI” for Victoria Regina Imperatrix, which was Queen Victoria’s title as Empress of India. The pattern of the crown is a bit different too; as Queen, her initials were usually topped by a Georgian Crown, but as Empress, I've seen this crown frequently used. So, I believe this sword was carried by an officer of the British Army in India. An unusual, but not unheard of variation from the standard pattern is the use of leather, rather than shagreen (fish skin) for the grips.

In 1892, the British Army kept the same style hilt, but changed from a slightly curved cut-and-thrust sort of blade to a straight thrusting blade. The prescribed pattern blade is different from this one in that it was to have a lower section without any blade edge and a central fuller, and the upper section would have an edge leading to a point. This sword has the more traditional blade edge starting forward of the ricasso, with a broad fuller between it and top of the blade. In the last 12 inches, the blade becomes diamond shaped in cross section, terminating in a spear point. I believe this sword blade was manufactured about the time the curved blade went out of style. The blade is unmarked, although it has a blank brass proof disk. I think this may be typical of less expensive blades available through uniform tailor shops thoughout the empire.