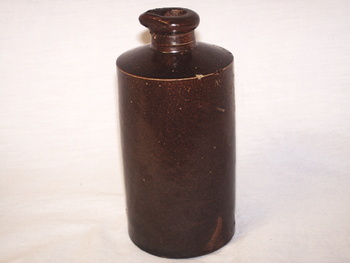 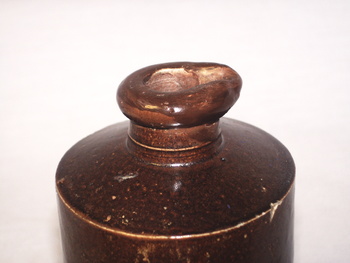 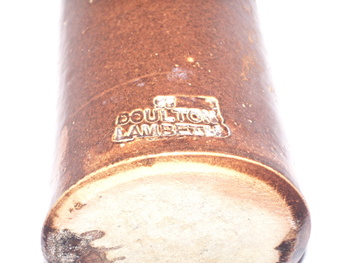 Hi
Everyone.
I found this nice little Stoneware pottery at GW today, made by Doulton Lambeth for the early XX century(pic 3),nice dark brown glaze ,could be some medecine bottle sort of, This little bottle was 6 inch tall by 3.75 inch diameter with .50 inch top opening.

The Royal Doulton Company began as a partnership between John Doulton, Martha Jones, and John Watts, with a factory at Vauxhall Walk, Lambeth, London. The business specialised in making stoneware articles, including decorative bottles and salt glaze sewer pipes. The company took the name Doulton in 1853.

By 1871, Henry Doulton, John's son, launched a studio at the Lambeth pottery, and offered work to designers and artists from the nearby Lambeth School of Art. The first to be engaged was George Tinworth followed by artists such as the Barlow family (Florence, Hannah, and Arthur), Frank Butler, Mark Marshall and Eliza Simmance. In 1882, Doulton purchased the small factory of Pinder, Bourne & Co, at Nile Street in Burslem, Staffordshire, which placed Doulton in the region known as The Potteries.

When the Anglican St. Alban's Church was built in Copenhagen, Denmark, in 1887 with Alexandra, Princess of Wales as one of the driving forces, Doulton donated and manufactured an altarpiece, a pulpit and a font. They were executed in terra cotta with glazed details to the design of Tinworth.

By this time Doulton was popular for stoneware and ceramics, under the artistic direction of John Slater, who worked with figurines, vases, character jugs, and decorative pieces designed by the prolific Leslie Harradine. Doulton products came to the attention of the Royal family. In 1901 King Edward VII sold the Burslem factory the Royal Warrant, allowing the business to adopt new markings and a new name, Royal Doulton. The company added products during the first half of the 20th century while manufacturing fashionable and high-quality bone china.

The headquarters building and factory of the Royal Doulton ceramics firm were in Lambeth, on the south bank of the Thames. This Art Deco building was designed by T.P.Bennett. In 1939 Gilbert Bayes created the friezes that showed the history of pottery through the ages. The Lambeth factory closed in 1956 due to clean air regulations preventing urban production of salt glaze. Following closure, work was transferred to The Potteries. The factory building was demolished in 1978 and the friezes transferred to the Victoria & Albert Museum. The office building in Black Prince Road survives, complete with a frieze of potters and Sir Henry Doulton over the original main entrance, executed by Tinworth.