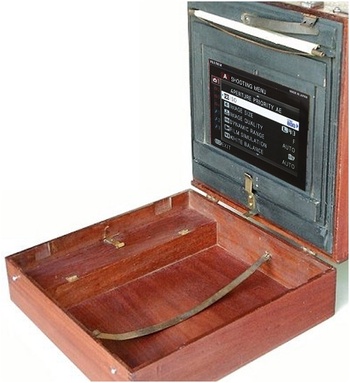 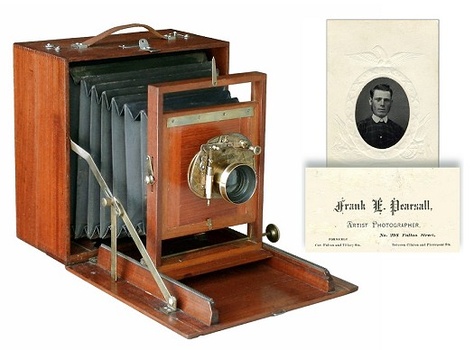 Years back I posted a very rare Pearsall Compact Camera here on S&T (second image). It was a ground breaking design back in 1883, by the famous Brooklyn studio photographer Frank Pearsall, which established the future of bellows camera designs through to the 1970s.

What isn’t known is that the talented Pearsall was a tinkerer and electronics experimenter who was trying to devise a way to make picture taking easier and more lifelike. Presented here is his little known attempt to digitize photography; history’s first digital camera (first picture).

Pearsall’s contemporaries scoffed at his attempts saying that nothing would ever replace wet collodion photography or dry plates. After all, how could electricity replace the beauty of chemical based images they asked?

So ... here in its full glory I present the hideously rare and overlooked digital back by Frank Pearsall built into his landmark camera. It was a miserable failure because computers and memory cards had not been invented; as such, digital images couldn’t be made.

Oh well, some great ideas were simply ahead of their time.

Besides, the user interface is really confusing!