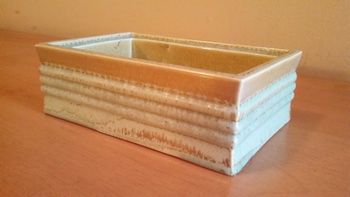 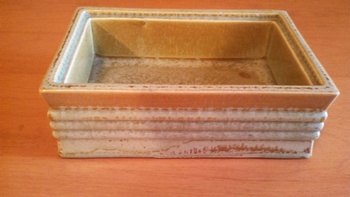 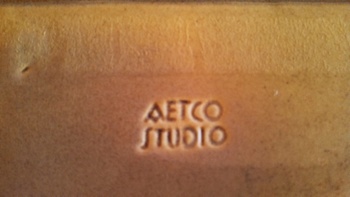 This rare Art Deco vase or planter (reminds me of a bonsai planter) was manufactured by the American Encaustic Tiling Company (AETCO) of Zanesville, Ohio. Circa 1920's-1930's.

According to Old House Authority, "The American Encaustic Tiling Company, also called AETCO or AE (1875-to at least 1945), was one of the most distinguished American makers of household adornments, as well as one of the largest tile producers of modern times. AETCO's wares found their way into countless American houses and public buildings. AETCO provided 'artistic' tiles of a very high order of design and execution for innumerable front porches, vestibules, halls, and fireplaces while, at the same time, it helped to convince Americans of the merit of tiled bathrooms and kitchens. "

Although AETCO was prolific with utilitarian and decorative tiles during the period, this vase appears to be from their studio line of more decorative objects. They had a showroom in New York City at the time, and this studio piece might have been from there. It has a green and brown crystalline glaze that reminds me of Fulper pieces of the period. The angular, geometric, and stepped base of the piece is typical of the design motifs of the Art Deco period.

It must be an unusual piece because Mark Bassett contacted me years ago for some photos of it to put in one of his pottery books (not sure if it ever was in a book or not):