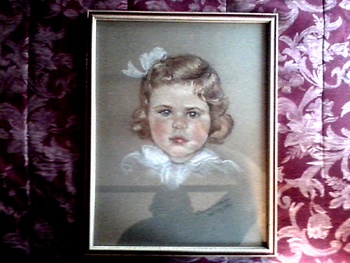 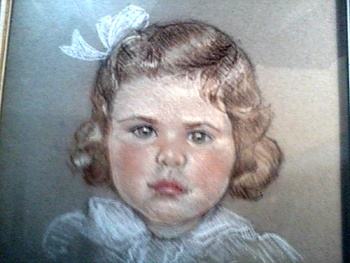 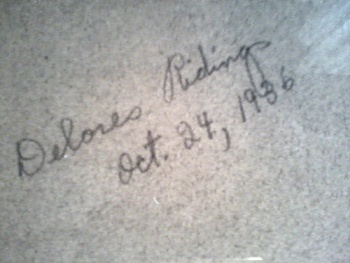 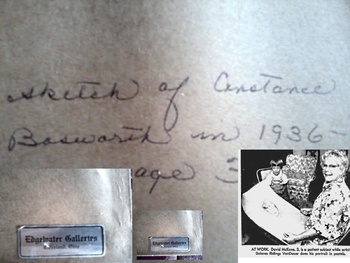 I found this charming pastel in the picture stacks at Goodwill today. I can't for the life of me figure out why no one grabbed it. Such a pretty little girl and very nicely drawn. It's hard to believe she's eighty years old. The frame is still sealed and the pastel colors are vibrant. There's a foil label from a Cleveland gallery and the title written on the back along with the little girl's name and age. -Mike-

Thanks to eye4beauty for finding Delores' obituary from 2012 in the Cleveland Plain Dealer and an article in the Toledo Blade about her career as a portrait artist. Born in 1916 she lived to be 95 ! It also cleared up a few mysteries. She used her married name of Van Duzer on her later works. This one is fairly early. Sketched in her 20's and before she married. So it is signed Ridings. She had been commissioned to do portraits of the Charles Ketterings Jr. children. Kettering and his wife were so impressed with her talent they paid all her expenses to attend the Cleveland School of Art. While there she met her future husband William Van Duzer who was an artist and sculptor She became a prominent pastel artist doing children's portraits in her home town of Toledo Ohio. She had showings at the Toledo Museum of Art in 1949 as well as the Cleveland Art Institute. Delores later moved to Sante Fe New Mexico where she continued to work and occasionally returned to the Toledo area to do commissions. -Mike-