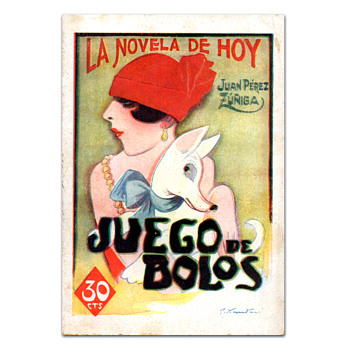 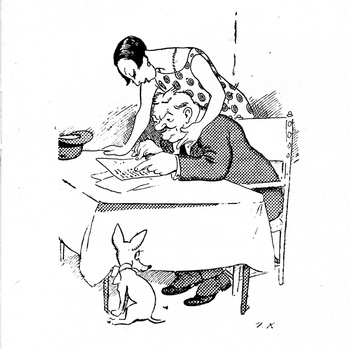 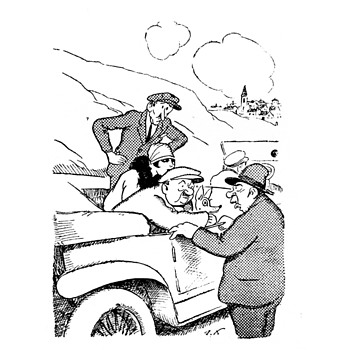 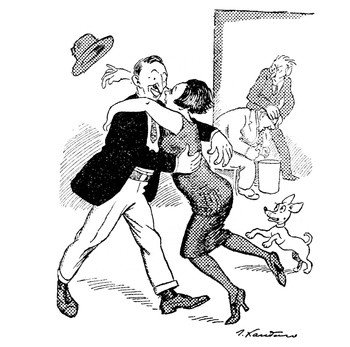 When last week I found the LA FARSA little books I started a search of simmilar ones... I immediatey got four very beautiful books with covers illustrated by Alonso, but not happy enough I went on searching for books published in the 1920s/1930s. And then I found this one: JUEGO DE BOLOS (The bowling game), published within the collection La Novela de Hoy (Today's Novel), written by Juan Pérez Zúñiga and illustrated by Joaquín Xaudaró. And yes, Xaudaró's dog appears both in the cover and the illustrations inside.

La Novela de Hoy is one of the many cheap paperback short novel collections that were published at the time. It's amazing there were a lot of these books or magazines printed every week, appart from literary magazines and regular books. La Novela de Hoy offered comic-erotic novelettes and was published very succesfully between 1922 and 1932. Due to the subjects of the novels in the collection, it was always in the eye of the official censorship. When in 1929 they published "The Captain's daughter", a short novel by Ramón María del Valle-Inclán (one of the best writers in the 20th Century), Primo de Rivera ordered the prosecution of the director of the collection, Artemio Precioso, who finally exiled himself in France.

There's little I can add about Xaudaró, as this is not the first time I post about him, and much less about its famous dog, who has been the main character in four of my postings. I can only say I really really had to buy this book when I saw it :)

On pics. 2, 3 and 4 you can see three of the six illustrations in the book, all of them with the already famous dog