These are just a few examples of older currency. There was a time right on up until the mid 1960's when you could take any "silver certificate" and trade that note for actual silver dollars. Pic one is a Federal Reserve Note dated 1934. Pic two shows another green seal federal reserve note dated 1950 and in pic three you have a blue seal silver certificate note dating 1953. Notice on the top of this last bill where it says "silver certificate" and says along the bottom that $5 in silver to be paid to the bearer of this note on demand. Back in the day there were those that thought keeping the silver certificate notes would be a better investment than trading them for silver. Now notes like this are worth about $10-$15 each whereas $5 worth of silver coin is worth more than 10 times that amount. I'm not a currency collector per se but I do have several notes with most being the $1.00 silver certificates. Of the some 100 $1.00 notes, the total value for all would be less than $300 or about $2.95 per note. The ones in better condition, possibly a dollar more. But a dollar in silver is currently worth about $24-$27. Another one of those, "Boy I wish I could go back in time" things.

US Silver Certificates
See all 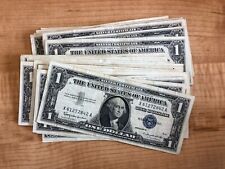 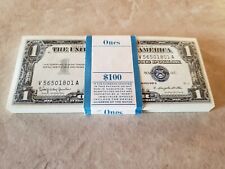 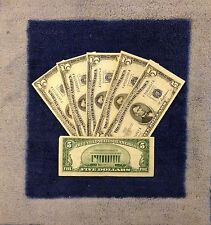