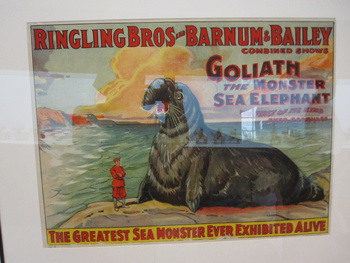 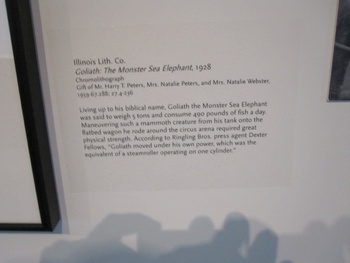 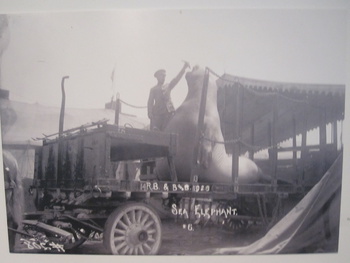 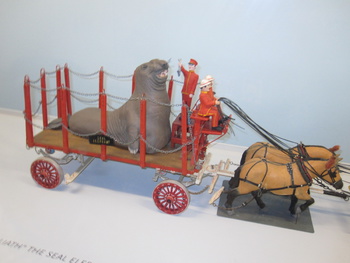 2nd in a series of many great circus posters currently on display at the Shelburne Museum outside of Burlington VT. This is an amazing collection of circus posters, including many Barnum and Bailey posters I'd never seen before. Part of my summer 2010 east coast antiques tour.

Presumably weighing five tons, Goliath was part of a Barnum and Bailey show in 1928... shown here is the poster, an actual photo, and a replica of Goliath which was part of Roy Arnold's miniature parade (more on this to come in another post).

More detail from a post-mortem news report in 1932:

"This year's absentee was Goliath II, the 5,000-Ib. sea-elephant who, with his friend Goliath I, brought the lower animals back into their own at a time when they were threatened with being eclipsed by aerialists, acrobats and human freaks. Circus-man Ringling bought the two Goliaths in Hamburg four years ago, exhibited the larger and elder until he died, then brought forth his understudy, who by then weighed some 4.000 Ib. and was getting his growth. For two seasons spectators gaped at Goliath II as he was carried around the arena in a motor truck, snorting like thunder, gulping fat herring by the barrel.
Insanely popeyed, ponderously oozy, hideously fierce of tusk and whisker, a full-grown sea-elephant suggests some monstrous abortion of the animal kingdom's primal urge. Shrewd John Ringling told the public about sea elephants through Calvin Coolidge. When he took his circus to Washington in 1928 Mr. Ringling called at the White House, casually mentioned to President Coolidge that he had a sea elephant in the show. Mr. Coolidge nodded his head, went to see for himself. He discovered that the sea elephant is just an overgrown species of seal (Mirunga leoninus or patagonica), carnivorous, mammalian, with a flexible proboscis, hind limbs so rudimentary that they look like a big tail; broad, flat for ward flippers for swimming and spanking the young. For Mr. Coolidge's pleasure Goliath I devoured 50 Ib. of herring. Six months later a shark got into his enclosure off Sarasota. bit a piece out of his neck, probably caused his death.
This year is Goliath IIs fifth in captivity, and as winter waned at his Florida quarters he began to grow listless, sluggish. He would not eat. His cavernous trumpetings became dismal, froggy croaks. Trainers, seeing the remaining half of a $10,000 investment shedding weight at the rate of 10 Ib. a day, called doctor after doctor, but no physician's hand could feel that flapping pulse, no stethoscope could reveal the disorder beneath a hide thick as a truck tire. Last week Goliath II still lay in Sarasota and the Circus went on without him."