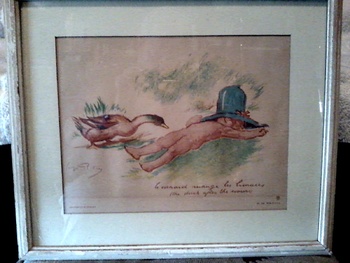 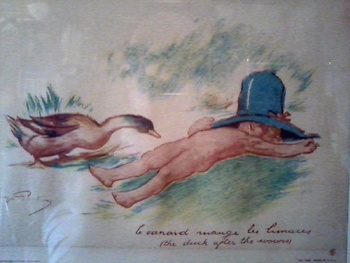 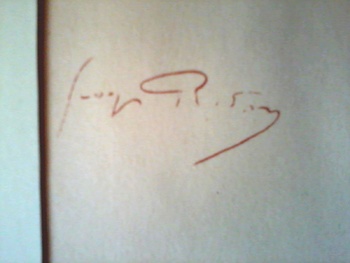 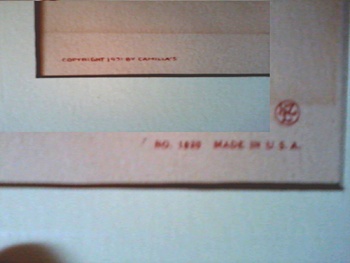 I found this at Volunteer's of America this morning and I laughed so hard. This 15" x 13" print is a bit unnerving at least for us guys. Not the best place to be napping in the nude ! Poor little guy is about to have his boyhood assaulted by a hungry duck. Yikes ! Georges Redon created six of these"naughties" of children doing what kids do. At least back in his day. Not much info about him but these prints appear to be his best known work. This print came from Camilla Lucas which was an art retailer in New York through the 30's and 50's. It carries the Sidney Zoltan Lucas mark on it's border. -Mike-

George Redon born in Paris on November 16, 1869. Died in 1943 He was an engraver, lithographer, draughtsman and humorist. He was painting restaurant menus at the turn of the century. Several works by the artist have been sold at auction, including '6 Works: Six satirical color prints of children' Termed "Naughties " by some, they are his most well known and charming if a bit risque' works.

"Camilla Lucas" and Sidney Zoltan Lucas
In 1928, Hungarian-born Sidney Zoltan Lucas founded "Camilla Lucas," which encompassed a wholesale art publishing house and a retail art gallery. This business was both wholesale and retail and dealt in reproductions of antique, modern and contemporary prints. It also sold original art including etchings, lithographs and paintings. Starting in the 1930's and continuing into the 1950's, Sydney Lucas traveled to Europe periodically and contracted with French and Flemish artists to publish their work under the banner of the "Paris Etching Society." Pieces published by Lucas are marked with a triangle or circle with Lucas' initials inside and sometimes "PES" for the Paris Etching Society.