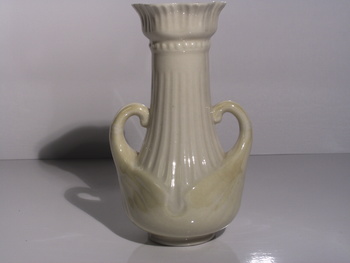 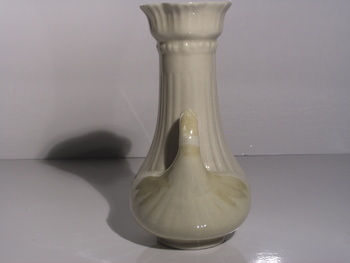 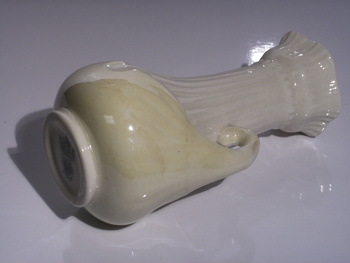 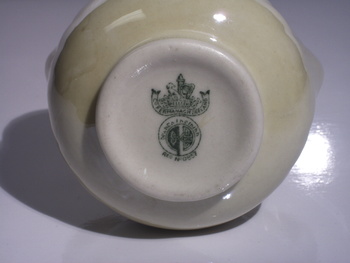 Hi
Everyone.
I was very quite yesterday, no matter if that particular day (07-11) was special, My Birthday, oh yes, just finishing my 56 years, few thing special, good Breakfast on my deck with Northern Oreole, Robin, Nuthache and Cardinal, signing for that special day, Humm, like everyday, LOL, Of coarse my good friend for 32 years(my wife was with me).
Because it is MY DAY, she let me go Hunting for fews of my birthday present, from Me to ME, well this is what i hope, well, i have to say, this is one of those day's you remember for a while.
I found this "Beleek Vase"on the first yard sale i stop, actuelly, 1/2, next post also feature that factory pottery.
I read on internet, this factory produce extremly thin Porcelaine pottery, that is truth, this vase weight like a feather, but so beautiful, i read also about the Belleek Mark, this Vase ware a green Mark, this mark is after 1946 to 1980.
This little vase stand 6.75 inch tall, 4 inch handle to handle, 3.50 inch at the widest portion, 2 inch base with delicate scalloped rim (6), very fine cannelure from top the the buttom.

Belleek Pottery Ltd is a porcelain company that began trading in 1884 as the Belleek Pottery Works Company Ltd in Belleek, County Fermanagh, in what was to become Northern Ireland. The factory produces porcelain that is characterised by its thinness, slightly iridescent surface and that the body is formulated with a significant proportion of frit.

Pottery in the region began around 1849, after John Caldwell Bloomfield inherited his father's estate.[2] Seeking to provide employment for his tenants, who had been affected by the Irish potato famine and, being an amateur mineralogist, he ordered a geological survey of his land. On finding that the area was rich in minerals, Bloomfield went into partnership with London architect Robert Williams Armstrong and Dublin merchant David McBirney. In setting up a pottery business, Bloomfield managed to get a railway line built to Belleek so that coal could be delivered with which to fire kilns.[2] Building started on the pottery in 1858. Initially starting with domestic products, it wasn't until 1863 that small amounts of the Parian porcelain for which Belleek is famous for to this day, was successfully produced. By 1865, the prestige of the company had increased enough that its market included Ireland, England, the United States, Canada and Australia, and clients included the Prince of Wales, Queen Victoria and the nobility.

The original owners had all died by 1884, and a local group of investors acquired the concern and named it Belleek Pottery Works Company Ltd. Master craftsmen Frederick Slater moved from England to Belleek in 1893 and by 1920 high quality porcelain was becoming the mainstay of the business. The company struggled throughout the First and Second World Wars, and the company concentrated on producing earthenware during these periods.

After the Second World War, Belleek Pottery stopped production of earthenware entirely. The Pottery began the change from coal fired kilns to electric powered kilns from 1952. In 1983 the Industrial Development Board gave financial assistance to the company and installed Roger Troughton as the Managing Director. The following year Troughton made a successful bid for the sale of the company. In 1988, Dungannon-based Powerscreen International bought the company and opened a Visitor Centre the following year.

The company changed ownership again in 1990. Dundalk-born US-based Dr. George G. Moore remains the owner, though the company is run locally by four directors. Since then Belleek Pottery has expanded its size in terms of factory space, acquisitions of other companies, staff and turnover. Subsidiary companies now include Galway Crystal, Aynsley China and Donegal Parian China. It employs more than six hundred people and enjoys an annual turnover of around £30 million.