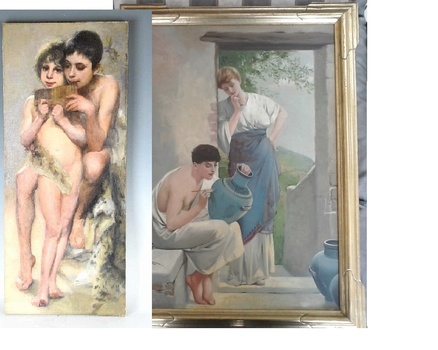 I'm feeling pretty confident that I may have tracked down the artist to the painting I posted the other day. I was able to get the picture out of the frame today, but no signature on the bottom edge. There is an artist on the Ask Art site by the name of Mary K. Trotter. Trotter is written on the stretcher of my painting in pencil. Even though there are other hard to make out letters and and a street address. The auction painting is signed on the back as well. She appears to have studied in Paris and even exhibited works. Lots of reference books too which I don't have access to are listed on the site with some info about her. There is not much about her on Ask Art except she was born in 1857 and lived in Massachusetts. There's not even a year of death. No bio of any kind. There was one reference work that I found on Invaluable and Ask Art. It was sold at auction in April of this year. I find the style similar and the model in that painting almost identical to the potter in my painting, he's maybe just a bit older. What do you think ?? Do you see the same similarities I do ? -Mike-