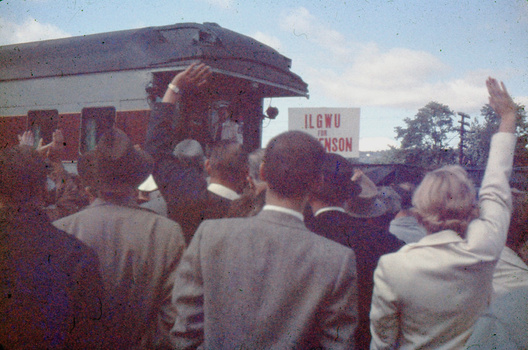 Not a really a good capture, this is an original slide that I tried to photoshop into a better image.

This was taken in Kingston, PA, on the Lackawanna's Bloomsburg Branch. Passenger service in this area ended years earlier, and this train is part of Adlai Stevenson's 1956 presidential campaign tour (Unfortunately, he is not visible in this image). These specials were called "Whistle Stops", as a candidate would travel the hinterlands, with the train making short scheduled stops, so that people would at least have some familiarity with the candidate. Incidentally, Stevenson lost to Eisenhower in that year's election. He also lost to the same man back in '52.

Notice the coal cars in the center, Anthracite mining in the area was still big then, though its end was near. And also notice the Lackawanna business car, any ideas on its number or status at the time. And what may the present day disposition of this car be?

Next stop, a little to the South in Plymouth, PA, then down through Central PA.