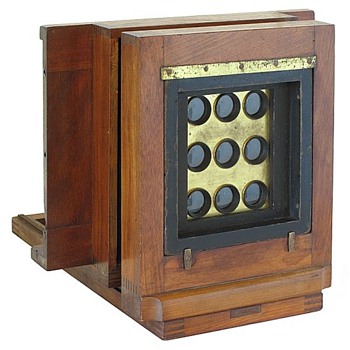 Today, we take for granted the ability to make lots of pictures, and copies of pictures at no cost. This wasn’t the case back in the mid-1800s when making tintypes because each image was unique - there was no negative Digital photography makes it an easy process because all that is needed is a smartphone or wireless connected cameras to post images to various social media sites at the push (click) of a screen button.

A solution in lowering the cost and making it easy to have many of the same image was to simultaneously shoot many images on a single plate; which required specialized photographic equipment called ‘multiplying cameras' by collectors.

Some cameras used anywhere from 2 to 36 lenses while still others had both shifting backs and multiple lenses. These cameras soon were referred to as Multiplying Cameras and were very efficient at producing numerous images in a short period of time. Multi-lens and multiplying cameras were popular from the mid-1850s to 1870s and continued to be made through the early 1900s.

Wet plate, multi-lens cameras are rare and prized items. The wet collodion process required that a plate be coated just before taking a picture. The entire process of coating the plate, taking the picture, and developing the image had to be accomplished while the collodion was still liquid (wet). It was a very messy process that ultimately ruined many cameras because the chemistry was caustic.

Shown here is a mid-1860s collodion ('wet' photography process) camera with a set of 9 portrait lenses mounted. Small format pictures produced by this type of camera were referred to as ‘gem’ images. Although a 9-lens outfit is rare, 16-lens and 36-lens cameras are also known and very difficult to find intact.

Strangely, picture taking with multiple lenses was quite difficult because each lens had to be carefully mounted to have the exact same focal point as all the others. This also meant that each lens had to be optically identical to the others; which posed a challenge for lens makers because they had to spend a lot of time going through their inventory to pair up lenses.

Imagine how these early photographers would react if they knew the future of photography would be electronic and automated!

Mahogany and Brass Half Plate Camer...
$66

Mahogany and Brass Half Plate Camer...
$66
See all