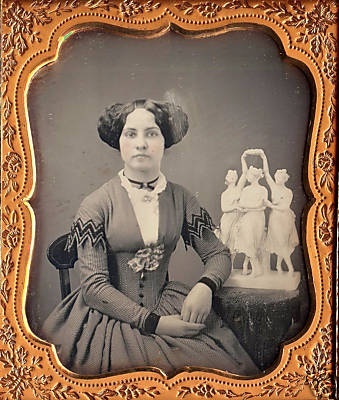 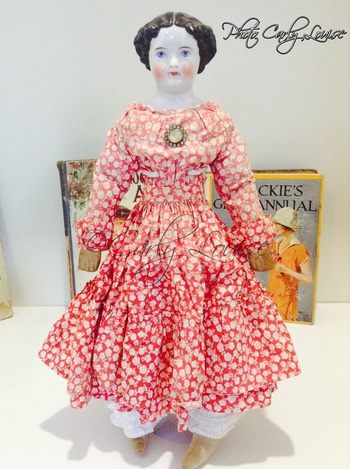 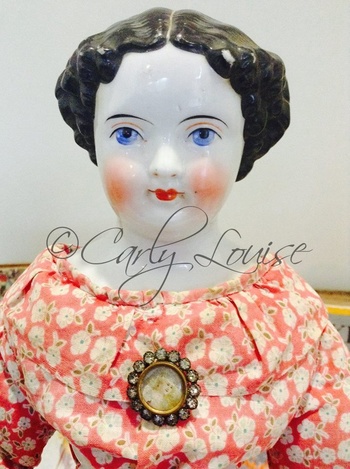 The 'Flat Top' hairstyle, after the mass-produced late Victorian and Edwardian 'Low Brow' style, is the second most common hair arrangement when one considers china head dolls and their coiffures. Maybe I'm biased because I'm the owner of this beloved china head (named 'Sara' after the Stevie Nicks-penned 1979 musical masterpiece), but I find her to be an especially striking and appealing example. Her colouring is vivid and lively. The photos do not do her justice in that respect unfortunately. Her tranquil countenance is accentuated by a kindly ruby-red mouth, the colour still so deep and vibrant after countless decades, glowing cheeks and large blue eyes framed by molded eyelids-she has an aura of benevolence and peace.

Sara stands at 17" and appears to have retained her original firmly-stuffed cloth frame-if it's not, then it was replaced many, many moons ago. Her thin ballerina feet are impossibly dainty. Her underwear is fairly pedestrian, nothing fancy; her partially-faded floral cotton dress is probably hovering at some point between antique and vintage.

She has minor wear to the head, a couple of tiny rubs, a few kiln specks here and there, certainly all typical of a doll of such advanced years. Sara's hairstyle is often referred to as a Civil War era style as it reached it's apogee of popularity and production around this time, but it's important to remember that hairstyles and molds often had a reasonable lifespan, and a style like this may have been produced for up to 20-30 years. In saying that, I imagine Sara may have been one of the first cabs off the rank judging by her deeply molded clusters of curls.

The final image of the Victorian lady is for hairstyle comparison-the rather striking sitter wears a 'flat top' hair arrangement. This image can be dated to around the mid-to-late 1850's.