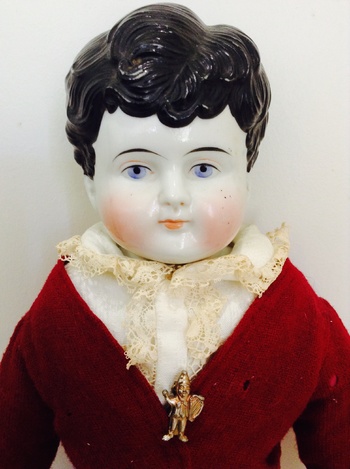 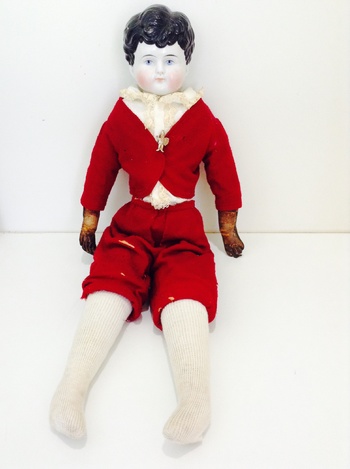 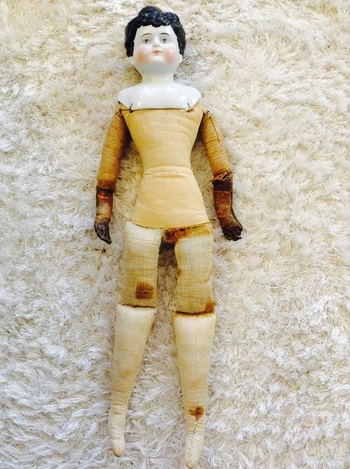 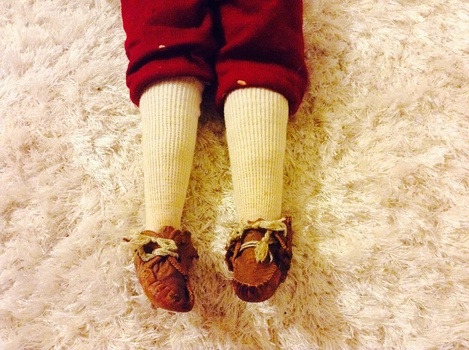 The Alt, Beck & Gottschalck porcelain factory in Nauendorf, Thuringia, Germany, were the makers of this angelic and very charming china head doll. The visage is that of a youth-he radiates cherubic innocence and peace.

Samuel, as he is known after entering my possession, as aforementioned, is a product of ABG. He stands at a nice height of 20", his firmly-stuffed body appears to be factory made, the torso as per the last image may have had a later recover. The lower arms are kid, some fingers are individual. The back of the shoulder plate is incised with the mold number '1210 #'. My understanding is that ABG did not mark their china dolls until later in the Victorian era.

Samuel has very deep, intricate molding, particularly the hair, which indicates he was likely one of the earlier dolls made from this particular mold. The ears are also finely molded, as are the eyelids. He bares the tell-tale plump cheeked well-fed appearance many ABG dolls are known for; I never noticed before but he has a tiny dimple in the middle of the chin, perfecting the adolescent appearance. There's the occasional kiln speck on the face here and there, often found on china heads.

He's a smartly-dressed young man. The clothing is old, I'm unsure if it's original to the doll. The deep red jacket and pants are a bit moth-eaten in places, the outside is made of wool serge, the inside lined with polished cotton ( I think). A high-necked cotton undershirt trimmed with old lace, a pair of knee-high socks and, referring to photo 4, a pair of ultra-cool and very delicate leather moccasins complete his attire.

Samuel was made around the 1880's; many beautiful child dolls were being produced around this period; CF Kling & Co also made some ethereal and truly exceptional child dolls.