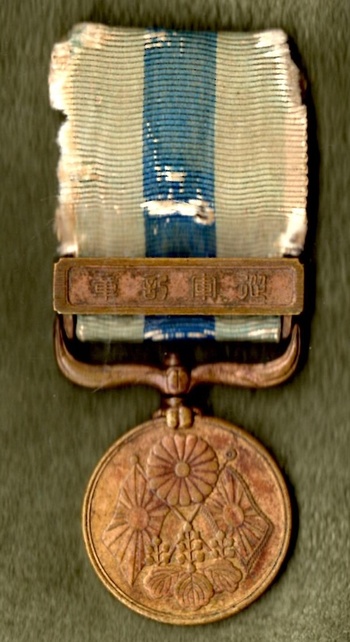 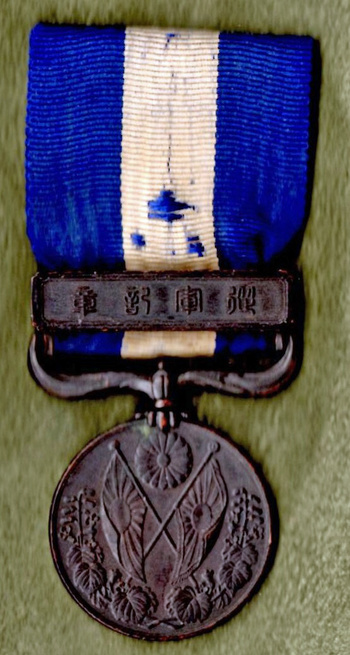 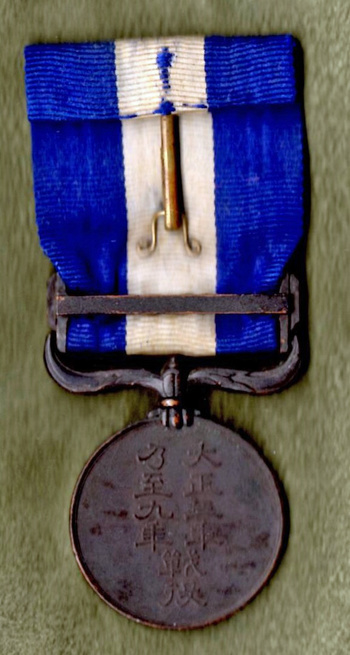 Although I am not a big collector of Asian militaria, I picked these two up to display with my Japanese WWI Victory Medal.

The first one is a campaign medal for the Russo-Japanese War (1904-1905). The war was fought between Tzarist Russia and Imperial Japan over dominance of Manchuria and Korea. That an Asian country utterly defeated a European power shocked the world and challenged balance of power in Asia as Japan emerged as a world player.

The medal is a gilded bronze. The attached bar translates as “War Medal.” The front shows crossed Imperial Japanese flags with the chrysanthemum crest of the Emperor above and the paulownia crest of the Japanese Government below. The reverse shows a shield inscribed “Meiji 37-8” (37-38th year of the Meiji Emperor) surrounded by laurel and palm branches.

The second one is a campaign medal for WWI. There was an earlier and nearly identical 1914-15 medal that commemorated the Japanese capture of Tsingtao, but then the dates were extended to cover Japanese deployment to Siberia to counter the Bolsheviks at the end of WWI. The 14-15 medal and 14-20 medal could not be worn at the same time.

This medal is of blackened bronze, and I had to use Photoshop to lighten this one up enough to see. Again the attached bar translates as “War Medal.” The front shows crossed flags with the Imperial chrysanthemum and paulownia branches symbolizing the Japanese Government. The reverse translates as “Taisho 3-9 (3rd – 9th year of the Taisho Emperor) War Service”.

The hook-and-eye catch on the backs of the medals allowed them to be draped around a special metal bar for wear. I don’t know of any other country that used this suspension system.