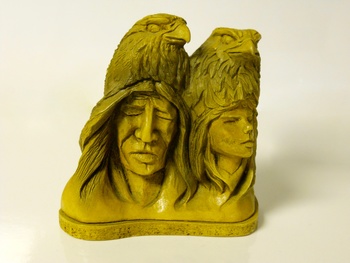 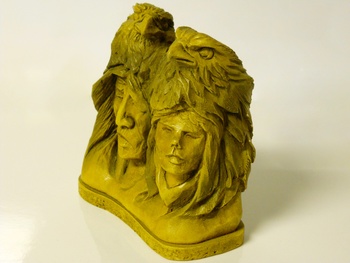 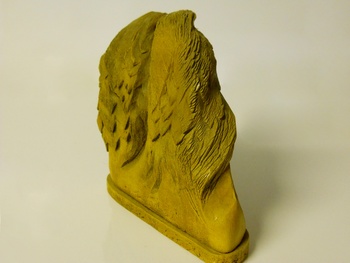 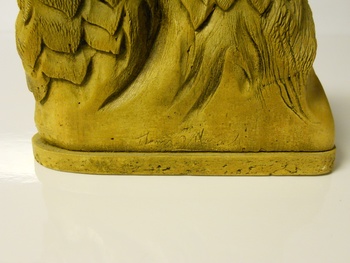 Good Evening CW Friends----(7:30 PM)2016-4-5
Here it is the last piece i found on my hunt of last Saturday at the Salvation Army, i have already found 4 of those carving from this Native American Artist"Thomas Maracle" in the last year, this one was not similar to the others pieces i own, this one is a Stone Carving, much heavier for sure, still very well done.

Thomas B. Maracle is an award winning native stone sculptor and musician as well as a successful entrepreneur. Thomas is a Native North American Mohawk, born in Belleville, Ontario in 1949. He is a citizen of the Six Nations Iroquois Confederacy and lives on the Tyendinaga Mohawk Territory near Deseronto Ontario Canada.
Since childhood, Thomas has been involved in native art. He was deeply influenced by the skills of his artisan parents who created arts and crafts for their gift store. They continue to be an influence in his personal and professional life.
Thomas has gained international acclaim as a sculptor for his ability to take a piece of virgin stone such as alabaster, steatite, marble or soap-stone and with vision, talent, and skill, set free images of the legendary people, animals and spirits of his native culture. Thomas has grown to love the physical, mental and artistic challenges required to bring to life, in his sculptures, the ancient legends of his people using the many different types, shapes and sizes of stone.
In the relatively short time Thomas has been carving, he has won many awards across Canada and the United States. His one-of-a-kind carvings are in great demand and are prized additions to collections throughout Canada and many other parts of the world, including England, France, Germany and the United States.