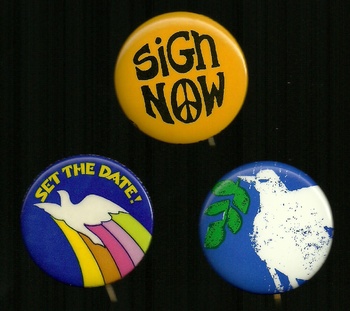 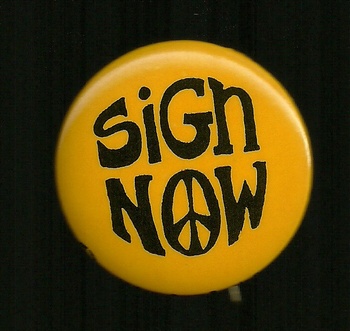 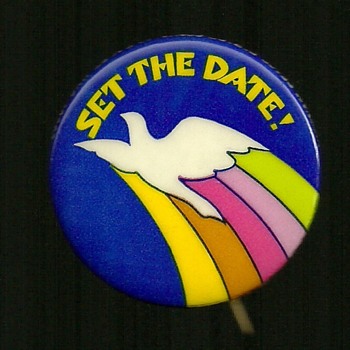 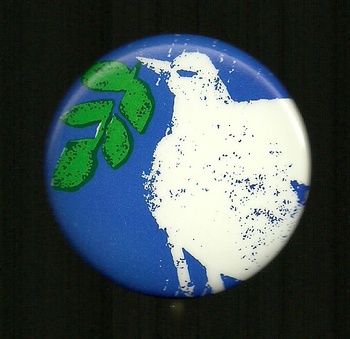 After these I THINK I only have 3 more to finish up uploading my Vietnam button collection (except for the "day-glow" buttons that don't scan true to there color) If you enjoy seeing Protest buttons like these feel free to check out the 100+ I've uploaded to date.

Three 5th Ave Vietnam Peace Parade Committee Protest Buttons from late 1971 & early 1972 acquired from The Marshall Levin collection (see below) These were made to urge Nixon to SIGN the Peace Agreement and SET THE DATE to end the War.

These 3 are from The Marshall Levin collection of pinbacks, When he died, his Greenwich Village apartment was filled with precisely organized and categorized filing cabinets and hundreds of cigar boxes filled with thousands upon thousands of buttons he spent forty years, c. 1960 to 2000 amassing the world's largest button collection, Marshall was the ultimate collector when it came to the breadth of collection topics and the background information he found on most of the items in his collection he was known for keeping great records about the where when and why each button was made. A Social Progressive of the First Order, Marshall personally attended many of the rallies that the pinbacks, especially the political and cause related represent. Marshall collected everything in pinback buttons and had a professional & personal relationship with most or all the NYC button makers where he would buy a dozen or more buttons as they were released as a result thousands of like new mint condition button were preserved and are now finding there way to the market.
I've been lucky enough to have acquired several from that collection that have become the corner stones and pride of my collection and being a bit of a mint freak I thank Marshall Levin for preserving such a large part of pinback history.
Peace