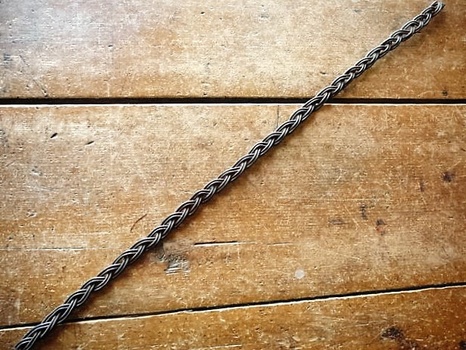 Recently I added a long sought after wire to my collection. This wire was patented by Othniel Preston of Hornellsville, NY, patent No. 238,348 on October 18, 1881.

Several months ago I was watching a History Channel program by the name Bible Hunters - Search for Truth. The program was about a man named Urbain Bouriant who in 1886 discovered a 2nd century book of the Gospel of Peter in a burial vault in Akmin, Egypt, next to a Monk. Presumably the book was one of the Monk's treasured possessions. The book was authenticated and copies published in 1891.

During the program I was captivated by one of the views of the manuscript. At the bottom of one page was a drawing of the very wire I was seeking. I stopped the program and took a photo of the TV screen.

It was common practice in ancient times to erase an earlier manuscript and re-use the papyrus. You can see an earlier image in the photo.

I have spent a lot of time researching to determine if the illustration of the wire was on the original manuscript or was it added in the 1891 publication. I have found no evidence either way. Hopefully a collector can steer me on the right path.