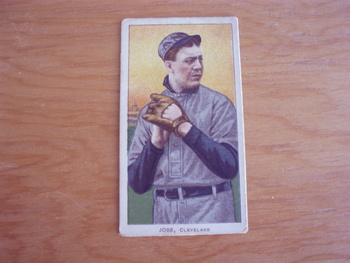 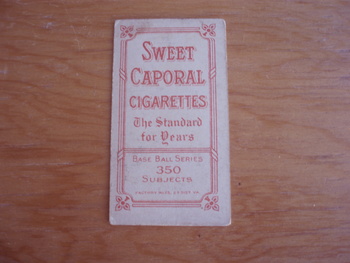 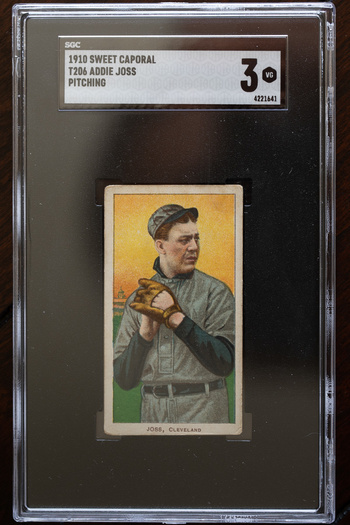 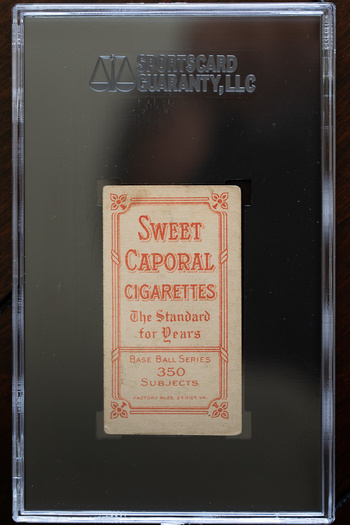 Good afternoon everyone,
Pictured here is one 1909-1911 T206 baseball card of Addie Joss who was also known as The human Hairpin. He stood at 6' 3" weighing in at 185 pounds. In his short life and 9 seasons of professional baseball he is credited for pitching the fourth perfect game in October 1908 with only 74 pitches.
Adrian Joss was born April 12 1880 and died April 14 1911 at the age of 31 from tuberculosis meningitis.
His 1.89 career earned run average (ERA) is the second-lowest in MLB history, behind Ed Walsh. Of his 160 major league wins, 45 were shutouts.
He finished with a 160–97 record, 234 complete games, and 920 strikeouts.
Joss never experienced a losing season in the nine years he pitched in the major leagues.
Though time couldn’t tell the full effect Addie Joss might have had on the game of baseball, he left a legacy large enough to remember.

Joss was inducted into the Baseball Hall of Fame in 1978. He is the only player in the Hall of Fame whose regular season playing career lasted fewer than ten year

The first "all-star" game was played as a benefit for Joss's family on July 24, 1911. The Naps invited players from the other seven American League teams to play against them. Visiting club players who were involved in the game included Home Run Baker, Ty Cobb, Eddie Collins, Sam Crawford, Walter Johnson, Tris Speaker, Gabby Street, and Smokey Joe Wood. "I'll do anything they want for Addie Joss' family", Johnson said. Washington Senators manager Jimmy McAleer volunteered to manage the all-stars. "The memory of Addie Joss is sacred to everyone with whom he ever came in contact. The man never wore a uniform who was a greater credit to the sport than he", McAleer said. The game was attended by approximately 15,270 fans and raised nearly $13,000 ($334,146) to help Joss' family members pay remaining medical bills.
( Wikepidia )
I have since had this card graded more so out of curiosity to determine that it is in fact original and not a copy. Something to pass onto my son/ grandson.