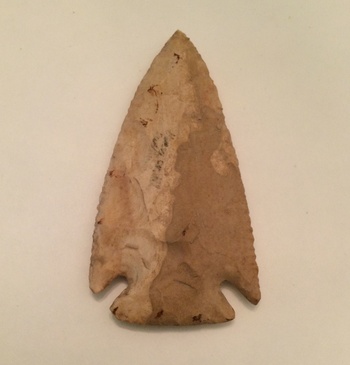 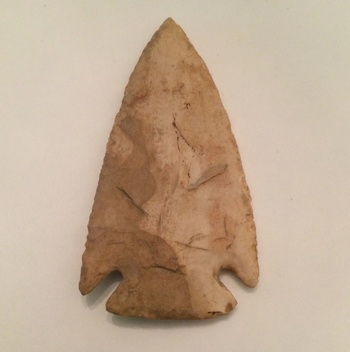 The Kirk Corner Notched point dates to the early-middle archaic periods of pre-history in North America, dating between 9000 - 6000 BP. This example is about 4: long by 2.5" wide, and was found in Henry Co., IL, USA. It is made of tan/beige banded chert. This example is not heavily resharpened and shows a slight impact bite which can be noticed about 1/3 the way down the right side in the first photo. It would grade G9-G8 range.

The Kirk Corner Notched point type is a medium to large sized, triangular shaped blade (sometimes serrated) with a short, fairly straight base. The shoulders terminate in sharp barbs that project towards the base. They are found throughout the Eastern United States. The Kirk Point was identified by Joffre L. Coe in 1964 for points found at the Hardaway site in North Carolina.