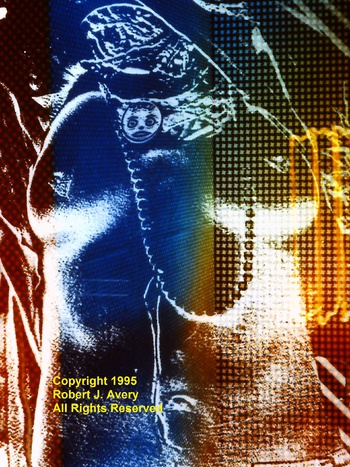 Believe it or not, this unusual color photograph was not created using digital processes, but rather by a combination of actual chemical photographic processes. The artist is a close personal friend ;-P

This began life as a straight black and white photograph of a Mardi Gras reveler on Bourbon Street who had bared all. This photo was taken back in the early 1980s. In the lab, this was projected onto several sheets of Kodalith Ortho film that were kept in perfect pinhole registration. This process created a series of positives and negatives that were subsequently masked and rephotographed using zipatone masking film. Several of these were then selected and sandwiched in registration creating a composite negative from which a black and white print was made. This was exhibited at the Arkansas Art Center in Little Rock in the 1980s and entitled "Nude in Bas Relief"

In the later 1980s - 1990s and in a separate project, several light paintings were created using colored gels, moving lights, candles, patterned paper, etc. through long time exposures with an open shutter on Kodachrome film. In 1995 one of these images was combined with the "Nude in Bas Relief" utilizing a slide copier and bellows on a Nikon F2AS and multiple exposures to create the image you now see. The colors and patterns emerged everywhere there was black in the original photo. In chemical photography days, cool visual effects required a lot of work!