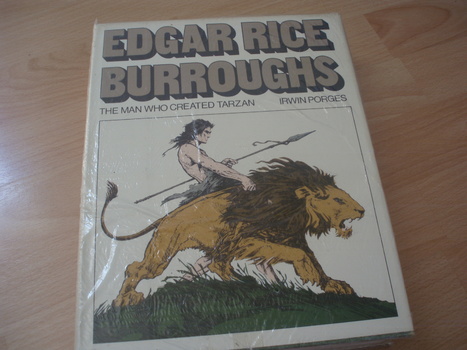 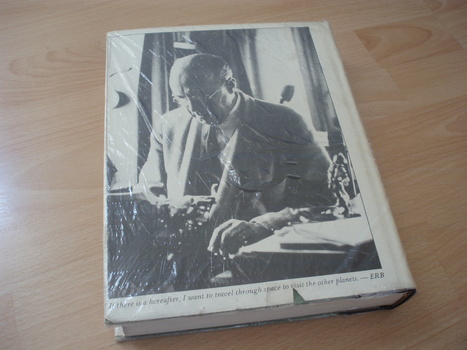 Growing up in the 1960's was when I first began reading Tarzan books, comics and Sunday newspaper comic strips written by Edgar Rice Burroughs. This was also the time of waiting to see Tarzan on the big screen very exciting for a young boy entering the fantastic world Mr. Burroughs had created including John Carter of Mars, The Mucker, and many more facinaiting characters and worlds this great author created. To this day I still keep an eye out for Tarzan memorabilia.
Irwin Porges as a boy read every book by Edgar Rice Burroughs so it is a natural fit that in his later years he would write the biography of his idol.

The book pictured here was written in 1975 by Irwin Porges and is a first edition with 820 pages covering the history of the life and works of Mr. Burroughs.

Edgar Rice Burroughs (September 1, 1875 – March 19, 1950) was an American writer best known for his creations of the jungle hero Tarzan and the heroic Mars adventurer John Carter, although he produced works in many genres. He is credited with writing over 80 novels.

Arthur Porges (20 August 1915 – 12 May 2006) was an American author of numerous short stories, most notably during the 1950s and 1960s, though he continued to write and publish stories until his death.

"Tarzan of the Apes" appeared in the October 1912 issue of All-Story magazine. Burroughs received 700 dollars for the tale.
The first Tarzan movie appeared in 1918, with Elmo Lincoln in the title role, which only helped to make Tarzan and Burroughs even more popular.
The year 1932 was ushered in with a scream, as MGM released the first sound Tarzan movie, "Tarzan the Ape Man" with the now legendary Johnny Weissmuller.

The works of Edgar Rice Burroughs will endure as classic tales of adventure, romance and wonder. Tarzan remains one of the best-known literary characters in the entire world.