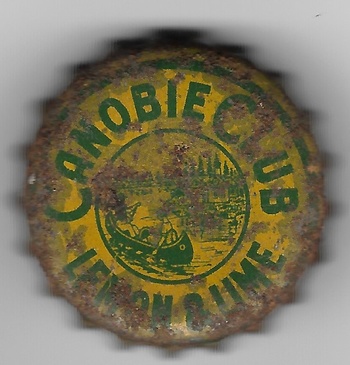 This "Canobie Club" soda cork-lined bottle cap was manufactured by the Coca Cola bottling plant in Salem, NH. I believe the cap is either from the 1930s or 1940s, but I have not seen any definitive dates on when this brand was produced. Coca Cola started bottling in Salem in the early 1920s, so I know it cannot be any earlier than that. Was it common for Coca Cola to produce soda under other names such as this? The bottles come up for sale occasionally, but there is only one labeled bottle known to exist, which is too bad because the label is very nice! The bottles had a label with the same graphic as the bottle caps, except it was in color.

Canobie Lake is situated half in Salem, NH and half in Windham, NH. Originally named Policy Pond, the name was changed to Canobie Lake around the turn of the 20th century. In 1902, Canobie Lake Park opened as a trolley park, and instantly became a success. However, Canobie Lake Park had to compete with Granite State Grove for several years, until the latter ultimately burned down and was never rebuilt. Currently, Canobie Lake Park is one of the oldest operating amusement parks in the country.