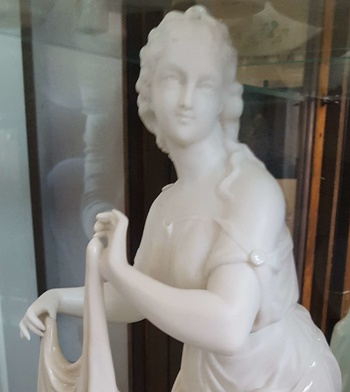 This is my baby - Figure of Erin bearing Belleek's first black mark dating her to between 1863 and 1890. She is in awesome condition for 127+ years old. She is 18" tall. I picked her up from a Canadian auction a few months ago.

From "The Mystery of Erin" printed in UK Belleek Collectors' Group Newsletter 25/2, September 2004:

"Belleek's Figure of Erin is perhaps it's most famous figure, but the lady is
enigmatic. The figure has been made in just about all periods of Belleek's
production and is generally taken to represent either Belleek Pottery itself or
Ireland and Irish production. The name "Erin wakening from her slumbers", which
is often given to the figure, is highly symbolic... but of what exactly? Does she
represent Belleek Pottery when they first became able to produce fine Parian ware
or is she allegorical of Hibernia (Ireland), or Irish artistic and industrial Production
which had been at a very low level before the mid-1850's and with Belleek Pottery
(amongst others) and the efforts of several famous Irish Patriots and Businessmen,
truly did begin to waken and show remarkable results?"