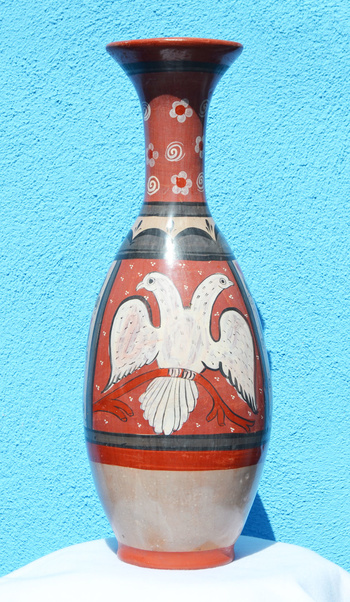 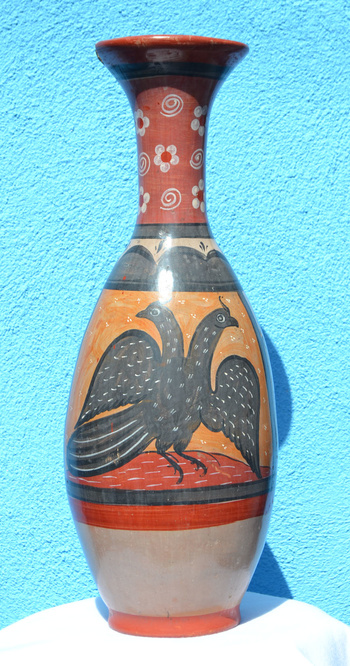 I couldn't let Cinco de Mayo pass without doing my part to celebrate the Mexican culture. We'll see how that turns out.

This vase is a puzzler to me. It is relatively new (maybe five years old at most), from Tonala, Mexico made of burnished earthenware in a very typical form and style and all would be well and good if it weren't for the two-headed birds. I've scoured several reference books on Mexican folk art and the symbolism used in it. I've seen images of doves, quails, partridges, ducks, and eagles - all with only one head.

I read this fascinating and ridiculously detailed history of the use of the two-headed eagle in (mostly) Western Civilization symbolism provided by the Masons. You can read that here - http://www.masonicdictionary.com/doubleeagle.html - if you like, but it offered no way to tie the symbol to the Mexican culture. Apparently though, two-headed birds (or other animals) were originally intended as symbols of the power of unification.

This vase has both a two-headed eagle (aguila) and a two-headed dove (paloma) - the hunter and the hunted; the aggressive and the meek. The eagle is black; the dove is white - the universal opposites without which each other would not exist - sort of the Mexican representation of the yin and yang. (Maybe because of the two heads that should be yin-yin and yang-yang.) Maybe the two-headed birds are a statement about the toxic environment.

I think I'll pass along my befuddlement and go have a cerveza.
Feliz Cinco de Mayo.